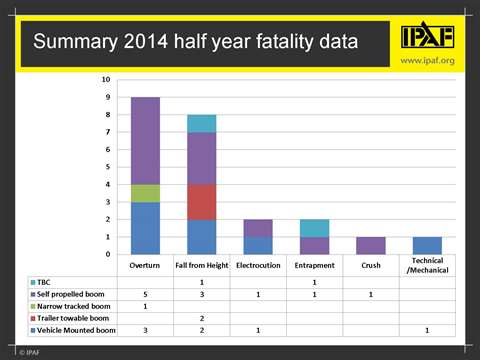 Graph illustrating the main causes of AWP fatalities in the first half of 2014.

The International Powered Access Federation (IPAF) has reported there were 23 fatalities worldwide involving aerial work platforms (AWPs) for the first half of 2014.

Overturn was the leading cause of AWP-related deaths, with nine instances occuring. There were eight falls from height resulting in fatalities, three entrapments, two elecctrocutions and one technical/mechanical fatality. According to IPAF, one of the entrapment deaths was the result of a person on the ground being crushed between the base of the AWP and another structure.

Mobile booms were involved in 11 of the fatalities and 10 static booms were also involved. Two machine cases have yet to be confirmed.

Of the fatalities, 13 happened in the U.S., two in Germany and one each in Australia, Austria, Colombia, Malaysia, Singapore, South Africa, Spain and the UK.

“More companies are participating in the accident reporting project, which is generating more data in its third year, but it is too early to draw comparisons,” said Chris Wraith, IPAF technical and safety executive. “This is a unique ground-breaking programme by the powered access industry to undertake ongoing analysis to learn lessons and improve safety worldwide. Preliminary findings from the accident reporting project have provided a rich source for improving IPAF’s training programmes and safety initiatives, for example, with regards to the safe loading and unloading of machines, and managing electrocution risks when working near power lines.”

IPAF’s accident data is based on information collected in a number of ways: directly reported to the IPAF accident database at www.ipaf.org/accident, information obtained by IPAF staff worldwide, and information collated from press releases and news reports. The comprehensiveness of the data cannot be guaranteed, but where appropriate, action is taken to verify the facts. The data is updated should relevant information become available.

“Accidents do occur, but we should keep in perspective that with over one million rental units worldwide, MEWPs are one of the safest ways to do temporary work at height,” said IPAF CEO Tim Whiteman. “And IPAF’s accident reporting project is designed to make a safe industry even safer.”

All manufacturers, rental companies, contractors and users are encouraged to report any known fatal and serious accidents involving mobile elevating work platforms (MEWPs) and mast climbing work platforms (MCWPs) worldwide at the IPAF accident database. The project is open to IPAF members and non-members, and includes an option for anonymous reporting. To register and to report an accident involving a MEWP or an MCWP, go to www.ipaf.org/accident.

At the ALH Conference & Awards, Nov. 11 at the Biltmore Hotel, Tony Groat, executive vice president of the American Work Platform Training (AWPT) arm of IPAF, will discuss these findings in-depth.