Haulotte has more than doubled its sales in China in 2018, the company said at its press conference during Bauma China, with shipments to new rental companies boosting performance.

According to Haulotte, China now accounts for around 35% of the total annual market for new machines in the Asia Pacific and Middle East region – more even than Japan or Australia – and the figure may be closer to 50% with the inclusion of unreported sales. 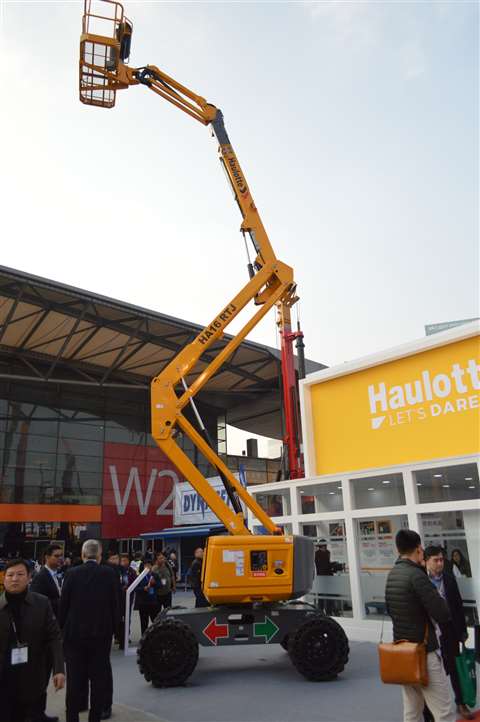 The first diesel boom manufactured in China by Haulotte - an HA15RTJ - on show at Bauma China.

One Chinese customer is Chengdu-based rental company ZHD, which will take delivery of the first diesel boom produced by Haulotte in Changzhou, an HA16RTJ, which was on display at Bauma China.

Haulotte continues to invest in its Chinese network. It opened new locations in Beijing and Guangzhou this year and plans an office in Wuhan in 2019, to add to its existing Shanghai head office and manufacturing plant in Changzhou. It also operates a third-party parts facility in Southwest China.

Harry Wang, Haulotte’s general manager for China, said the company would also benefit from its investment in electric powered machines – the new Pulseo generation introduced at Intermat earlier this year.

He acknowledged being uncertain about the reception in China of the all-electric booms, but said the recent launch event in Guangzhou with 120 Chinese customers had been a success; “After the launch we received fantastic feedback from the market. Chinese people want better air quality. The Pulseo product is aligned with the demands of Chinese people.”