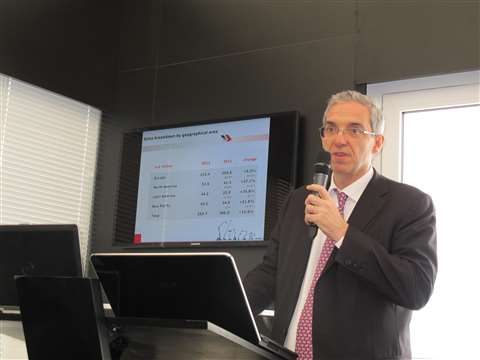 Haulotte has reported first quarter revenues for 2013 of €84.5 million, 5% lower than same period last year which was €89 million. North American sales were down -23% followed by a -11% decline in Europe.

Speaking at a press conference during Bauma, Alexandre Saubot, chief operating officer of Haulotte Group, said despite the declines, “there is nothing to worry about.”

“The U.S. is down because of a timing issue,” Saubot said, citing the company will make hearty second quarter deliveries of scaffolding, which Haulotte produces at its Archbold, OH, USA facility.

He also attributed the decline to an uncertain economy in Europe where customers are hesitant to purchase large volumes of equipment, instead opting to buy piece by piece.

Despite the declines, Saubot also said he would not gauge the market based on the first three months of the year and will instead look to the second quarter for an outlook. “We have a lot of expectations with Bauma and the second quarter,” he said. Saubot said Haulotte currently has a two-month backlog.

“The crisis is not over,” he said. “People are still cautious.”

On the flip side, Haulotte did experience gains in South America where sales jumped 42% and also increased in Asia Pacific by 15%.