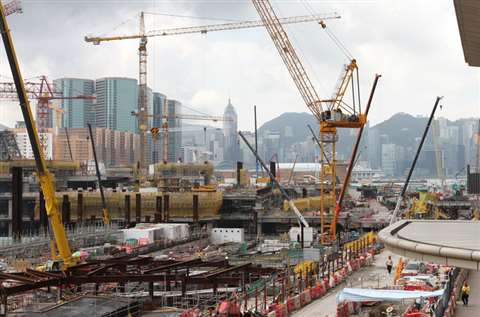 The cranes are working on the Hong Kong section of the Guangzhou-Shenzhen-Hong Kong Express Rail Link (XRL). Once complete, the rail link will have 15 platforms, connecting passageways, customs and immigration facilities, departure lounges, retail outlets and a large entrance hall. The WKT will connect to China and is expected to have almost 99,000 passengers daily.

To overcome issues with overcrowding, the terminus and railway line will be built underground. Five of the cranes were on site at the time o writing in early November, including three 280 EC-H 16 Litronic units, each with a capacity of 16 tonnes, and two luffing jib 355 HC-L Litronic 16/32 models. Two more 355 HC-L Litronic 16/32 models are due to be installed later this year.

The cranes are rented from Liebherr Singapore. William Tang, Liebherr Singapore sales manager, said, “These 280 EC-H units are performing a key role in crane duties to the underground levels, down to the lowest level at 33 m.

“The luffing jib cranes can handle a total lift capacity of 16 tonne, and 4.2 tonnes at the maximum 60 metre radius,” Tang added. “Most of the work for these units is on the superstructure and for subway and footbridge elements, much of which is prefabricated and consequently needs heavy lift cranes. Because of the enormous amount of lifting that is required at diverse parts of this project, luffing jibs are essential.”

Work at the site includes an open-cut excavation of approximately 1.7 million cubic metres of earth to a depth of 33 m and the use of 600,000 cubic metres of concrete and 150,000 tonnes of reinforcement steel, a spokesperson said. The roof will be made of 7,000 tonnes of steel trusses and supported by nine 30 m high columns. The roof is being constructed with prefabricated components, weighing up to 40 tonnes each and spanning up to 45 m.