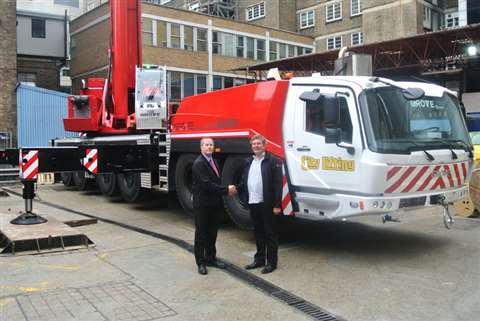 UK-based City Lifting has carried out its first job with its new Grove GMK6300L crane at Great Ormond Street Hospital in London.

The 300 tonne capacity wheeled mobile telescopic crane was used at the children’s hospital to install five air handling units on the roof of the nine-storey building. The units weighed 4 tonnes each and were lifted at a radius of 54 metres.

Due to a lack of space at the site, the crane could not be rigged with a fly jib, so all the lifts were carried out using the crane’s main boom, a company spokesperson said. Other challenges included a large hole which had been dug in the small access road directly outside the courtyard.

To complete the lifts the crane was manoeuvred around the hole and other obstacles on site, including a sidewalk and local traffic, using its all-wheel steering.

Trevor Jepson, City Lifting owner, said, “Cranes and holes do not mix but the GMK6300L is no ordinary crane – in this class, nothing comes close to it. It has a relatively small footprint and excellent all-wheel steering, which allowed us to manoeuvre the crane into the smallest of spaces with the narrowest of margins. It then completed all of the lifts in a single day. This was the crane’s first job and I’m delighted with it already.”

The GMK6300L is now the largest crane in City Lifting’s fleet. The company operates 40 mobile cranes and self erecting tower cranes in and around London.