Hybrid first for the Netherlands 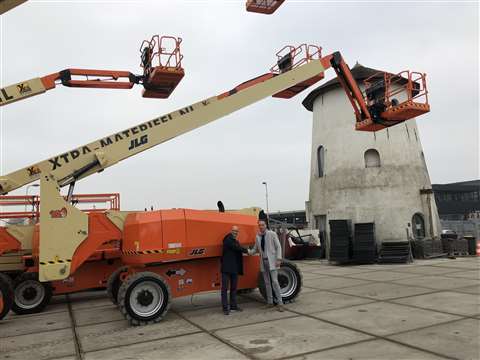 JLG has sold its first hybrid H800AJ articulating boom in the Netherlands. The unit was delivered to Xtra Materieel by distributor for the Netherlands Riwal Hoogwerkers.

The H800AJ JLG’s largest hybrid so far, delivering diesel-like performance, says the company, at 26.4m working height. With an outreach of 16.45m and an unrestricted platform capacity of 230kg, the H800AJ is a so-called parallel hybrid and equipped with an 18.6kW engine.

Standard equipped with an oscillating axle and four-wheel drive, the H800AJ is equipped with all-steel hoods. Optionally it can be equipped with non-marking tyres and bio-degradable oil, reducing its environmental impact.

“We are very pleased to add this 26m hybrid to our fleet. Our rental customers are asking for versatile equipment, but don’t want to compromise on power,” said Erik Westerhof, owner of Xtra Materieel. “With the H800AJ hybrid, you get the best of both worlds, the versatility of a hybrid allowing you to work indoors and outside, with no loss of performance.”

The machine was handed over by Wilco Stout, National Sales Manager at Riwal Hoogwerkers BV, to Erik Westerhof, Owner at XTRA Materieel BV.