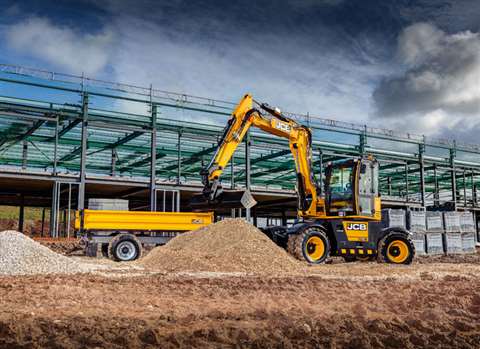 UK-based JCB will have its new compact wheeled excavator, called Hydradig, among its machines on show at Bauma.

Hydradig is described as a digging, lifting, loading and tool-carrying machine for urban construction, highway maintenance and municipal operations.

The company said it listened to its customers’ needs, and ensured that Hydradig would deliver on five key areas – visibility, stability, mobility, manoeuvrability and serviceability.

Operators have a 360° view from the cab, with visibility right down to each of its four wheels. The machine’s stability comes as a result of its low centre of gravity, which is said to allow stable lifting and faster travel speeds. The Hydradig can reach speeds of 40km/h when traveling between job sites, while an all-wheel steer gives it urban usability.

Hydradig can also be serviced from ground level, as the company said it wanted to maximise the safety of operators when servicing the machine.

Hydradig is equipped with three steering modes as standard. These are – two-wheel steering for security at road speeds, four-wheel and crab steering. A front axle with 8° of oscillation delivers rough terrain traction and stability, it said.

An optional reverse steering button on the main console allows the operator to use all three steering modes while the cab is facing in either direction. Hydradig offers a tight turning circle of just 3,946mm on single tyres, rising to 4,511mm when equipped with a front-mounted dozer blade.

JCB will also showcase its new 4- to 6-tonne midi excavators. The range’s features include 500-hour greasing intervals, improved cab instrumentation, an 18% increase in the operator’s cab capacity, an 11% improvement in visibility, a 9% boost to bucket tearout, and a 5% additional dump height.

It has also upgraded its mid-range wheeled loader range, passing on the features from its 457 wheeled loading shovel to the 427 and 437 models, along with the smaller 411 and 417 loaders.

There has also been an update to JCB’s JZ140 reduced tailswing excavator, with 5% fuel efficiency improvement, 29% shorter tailswing, and a 19% increase in cooler pack capacity.