Hydrogen-powered train to be trialled in Bavaria 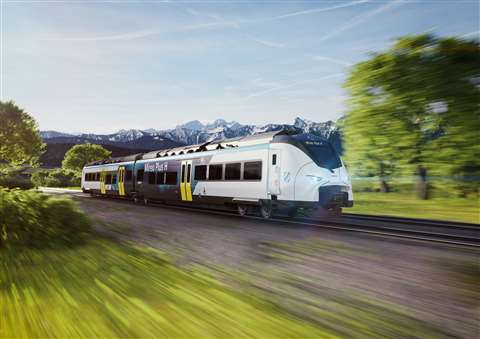 The hydrogen train for Bavaria (design image pictured above) is being developed on the basis of Siemens Mobility’s the Mireo Plus H platform.

Siemens Mobility it to trial a new hydrogen-powered train on passenger services in the Free State of Bavaria, South West Germany.

The two-car train can travel up to 800km and is equipped with a hydrogen traction drive. It comprises two fuel cells on its roof and is fitted with lithium-ion batteries manufactured by Sharp underneath its floor.

According to developer Siemens, which recently signed a multi-billion-dollar-contract for sustainable trains with US-based passenger railroad service Amtrak, the new vehicle is based on its Mireo Plus H train and can be operated on non-electrified rail lines “like any conventional train but without local emissions”.

Karl Blaim, managing director of Siemens Mobility, said, “Siemens Mobility is a leading supplier in the development of alternative drives, which can contribute significantly to reducing emissions, especially in regional transport where there are no electrified overhead lines.

“The technology partnership between Siemens Mobility and the State of Bavaria enables the further development of the Mireo Plus H for Bavaria and supports climate-friendly passenger transport in the state.”

While the hydrogen-powered train will be presented to the public in the spring of 2022, it will not begin its first test runs until the middle of 2023 – and is not expected to officially enter passenger service until 2024.

Use of the train on the state’s public rail network was approved by the Bavarian state ministers for economic affairs and for transport.

Hubert Aiwanger, Bavaria’s Minister of Economic Affairs, said, “The train is another important component in Bavaria’s hydrogen strategy. My ministry is promoting research, development and applications in the field of hydrogen technology.

“We’re organizing this rail project together with our partners because we’re convinced that hydrogen technology will make a significant contribution to decarbonizing transport. We’ll prove in Bavaria that business and climate protection can be reconciled with green hydrogen.”

With a Memorandum of Understanding now in place, Siemens will be permitted to pilot the hydrogen-powered train for 30 months on a number of rail lines within the Bayerische Regiobahn network, including the Augsburg to Füssen route.

Arnulf Schuchmann, technical managing director of Bayerische Regiobahn, said, “We agreed to test hydrogen technology and to test the Siemens Mobility train in passenger service because we are curious and open to alternative forms of propulsion in the railway sector as well.”

Siemens, the Bayerische Regiobahn network and other associated parties are now planning the safety protocols, staff training and refuelling facilities required for the vehicle’s use. 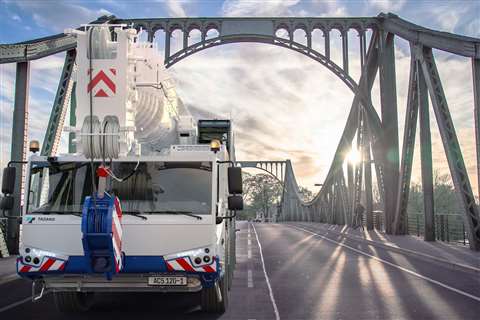 Double Tadano AT upgrade
Tadano announces upgrade of 110 and 120 tonne all terrain models, following last month’s upgrade of the 70 tonner