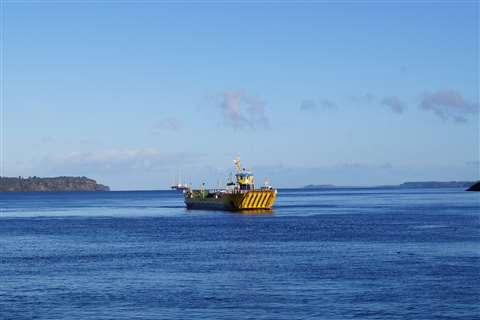 The US$740 million suspension bridge will span the Chacaoa channel

South Korea’s Hyundai Engineering & Construction reports it has resolved a dispute with the Chilean government over a US$740 million suspension bridge that will connect the island of Chiloé in the south of the country with the mainland.

In a statement emailed to Reuters, Hyundai said it would “give up its rights” to reach a deal and “mitigate its losses” on the project.

The company had reported at the end of December that it was “impossible” to continue the project because Chile’s Ministry of Public Works was trying to expand the scope of its work without due compensation.

For its part, the government claimed Hyundai had sought to increase the cost of the project by US$300 million.

The latest development is part of a saga of disputes and delays that began when the bridge was first proposed in 1972.

Originally, a consortium that included Vinci Grand Projets, Hochtief and the American Bridge Company was to have started work on the bridge in 2007 and be finished in 2012. However, the scheme was cancelled after that consortium more than doubled its cost from US$410 million to US$930 million.

In May 2012 the government decided to resurrect the project, and put out an international tender with a US$740 million bidding limit. This was won by the Chacaoa Bridge Consortium, made up of OAS and Hyundai, but OAS pulled out in the wake of the Lava Jato corruption scandal, otherwise known as Operation Carwash.

Chilean president Sebastian Pinera said the project would go ahead, adding, “There were some differences that have to do with costs and who should bear them, but that is already resolved.”

When complete – possibly in 2023 – the bridge will span more than 2.6km, making it the longest suspension bridge in South America, beating Venezuela’s 2.4km Angostura Bridge.