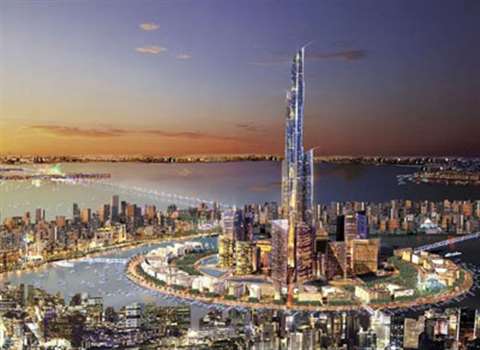 This artist's impression of the Mubarak al-Kabir Towershows the Kuwait Causeway in the background.

A consortium led by Hyundai engineering & construction has entered the lowest bid for the Kuwait Causeway project. The scheme will see a 25 km fixed link built across the Bay of Kuwait from Kuwait city to Subiyah.

The Hyundai consortium reportedly put in a bid of US$ 2.6 billion for the road link, beating a US$ 2.85 billion bid from Saudi Arabia's Bin laden Group. The causeway will be named after Sheikh Jaber al-Ahmad al-Sabah, who was emir (prime minister) of Kuwait from 1977 until his death in 2006.

The scheme forms part of the wider 'City of Silk' project, a 250 km2 urban redevelopment scheme centred on Subiyah. The scheme was approved by the government of Kuwait in 2008, and it has a projected cost of some US$ 95 billion and a 25-year development programme. Key parts of the project will include a new airport, business park, 2 km2 wildlife reserve and various education, health and industrial institutions.

The centre-piece will be the Mubarak al-Kabir Tower, designed by UK architect Eric Kuhne and Associates, which is to top-out at a height of 1001 m in 2016. The cost of the tower alone is put at more than US$ 7 billion.