Around 300 industry professionals gathered on 8 March 2018 in Miami, USA, to honour the winners of the International Awards for Powered Access (IAPAs). 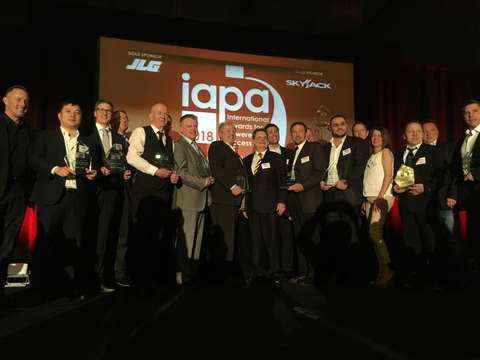 Those assembled at the Hilton Miami Downtown were also the first to learn that the next edition of the awards ceremony will be held in Dubai, UAE.

The 2018 IAPA winners, and judges’ comments, were as follows:

Access Rental Company of the Year: UNITED RENTALS, US

“In 2017 United really delivered: It managed two significant acquisitions, reported record utilisation rates, and demonstrated a commitment to training with the United Academy.”

“This was another competitive category, but Horizon won us over with its strong growth record, lean management style and commitment to customer service.”

Contribution to Safe Working at Height: HAULOTTE, France, for its ACTIV’Lighting System

“So simple, but very effective. A great aid to the safe loading and unloading of machines.”

“One of the most innovative Mast Climbing Work Platform products we have seen, and extending the possible applications for several of the company’s existing products.”

“We were impressed with the overall package; the platform’s low weight and hybrid power system, which gives extended duty cycles and significant reductions in fuel use.”

Product of the Year – Vehicle/trailer-mounted: RUTHMANN, Germany, for its T650 HF

“This is a special machine, with basket rotation, a compact design and a remarkable outreach of 43 metres.”

Project of the Year: UP MAKINE, TURKEY, for its work on the NEW ISTANBUL AIRPORT

“It’s an impressive project, with UP Makine providing machines to work 24/7 on three terminal buildings.”

“This is about safety, safety and safety! It represents a step forward in controlling access to machines and making working at height safer. A system that ensures harnesses are used.”

“A-Plant had an outstanding year for training in 2017, with very positive course evaluations. The company provides safety information for free, which says a lot about its ethos.”

IPAF Training Instructor of the Year: PETER WALLACE of NIS Training in the UK

“Peter is an independent instructor and demonstrated outstanding work. He has a great approach to engaging with candidates and always shows a very positive attitude.”

An internationally renowned expert on the rental industry since establishing his own consultancy in 1997, Dan Kaplan spent 15 years as president of Hertz Equipment Rental Corporation, during which time he grew sales from $58 million to over $500 million and expanded from 55 domestic locations to 140 locations worldwide.

In his years as a consultant he has worked with rental companies all over the world, helping them with their strategies and performing operational reviews of more than 2000 rental locations. He is regularly consulted by financial institutions and equipment manufacturers. His book, Service Success, published in 1994, has become a bible for anyone interested in the rental business.

Access Photograph of the Year (sponsored by Facelift): NEIL LAWRENCE, ORION PLATFORMS, for his picture of St Margaret’s Church, City of London, UK

Neil is Hire Desk Manager for Orion Platforms in the UK, and captured an image of a Palfinger WT450, 45m truck mount with 28m of outreach and a 600kg basket payload, which Orion supplied to the National Trust to inspect all the lead work on the spire of the Sir Christopher Wren-designed church.

The independent, impartial judging panel spent a full day considering the more than 100 entries received.The judges made decisions based on the merit of each entry and were excluded from entering their company for any award. The 2018 judges were:

Event photographs and details of all shortlisted entrant will be available at www.iapa-summit.info and Access International magazine.