IAPA countdown - one week to go 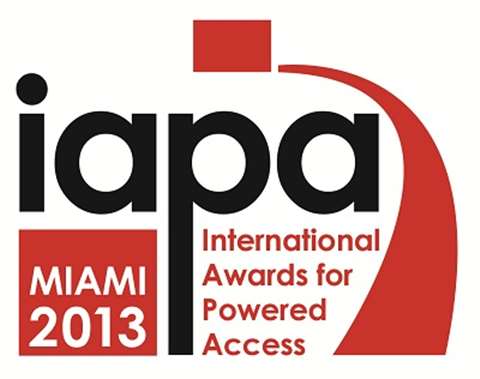 The Awards for Powered Access (IAPA) 2013 takes place in one week, on 26 March in Miami, so don't miss the opportunity to attend.

The IAPAs is a gala dinner and awards ceremony at the Hilton Miami Downtown Hotel, and take place the same day as the IPAF Summit. They celebrate best practice and excellence in the powered access industry. This ticket-only gala dinner is expected to attract more than 450 guests from around the world, so book now to be part of this special evening, at www.iapa-summit.info

Last week World Access Week announced the shortlist for the IAPAs.There were an impressive 86 entries to consider at the judges’ meeting, which took place on Tuesday, 5 February at the Sheraton Amsterdam Airport Hotel and Conference Centre, The Netherlands.

The IAPA awards takes place on 26 March in Miami, USA – the same day as the IPAF Summit.

Here follows the companies and individuals that made the shortlist. A full description of their entries will follow in the March issue of AI:

The winner will be announced at the awards ceremony

Award for Outstanding After Sales Service

Winner to be announced at the awards ceremony

The winner will be announced at the awards ceremony

This year’s IAPA awards will for the second time include an Access Photograph of the Year competition, again generously sponsored by UK rental company Facelift Hire. Theshortlist for this category will be announced shortly.

The IPAF Summit will be a full day of conference and seminars. The day will start at 9:00am with the IPAF Annual General Meeting (AGM) for IPAF members only. This will be followed by breakout seminars that all delegates can attend, covering topics related to AWPs and mast climbing work platforms (MCWPs), ranging from inspections and maintenance, to accident reporting and safety training.