The IC Transport 50 ranking of the world’s largest specialized transport companies has seen some big changes since last year.

Once again, the leader, in the number one position, has changed in that Mammoet has regained the top spot from ALE last year as the two companies swap places. It was the first change at the top of the table since the IC Transport 50 started, which is now 14 years ago.

It is interesting to note that the increase is all in the self propelled modular transporter (SPMT) and modular trailer category, up 5.4 % from 1,070,764 to 1,128,927. Last year it was up 3.99%. This would be in line with the widely held view that there is now a large surfeit of SPMT in the world because many lines were bought specifically for a couple of large petrochemical projects which are now drawing to a close or have already finished. It will be interesting to see how this affects things next year and further on.

The specialized trailer category was down 12 % from 750,085 to 657,368. The year before it was up 6.29 %. Such is the extra capability of modular trailers and SPMT over conventional ones, however, the decrease was more than cancelled out.

After that, All Erection moved up two places, at the expense of ATS, down one to 7. Barnhart gained two places, coming in at eighth place and Bennett maintained the ninth spot. Rounding out the top ten was Bigge, up one place from 11th last year.

This year’s table saw an impressive nine new or returning companies out of a total of 78 entries. At the same time we removed 21 companies due to a lack of data, mergers or other changes.

Two of the new or returning entries this year made the top 50, namely Berry Contracting/ Bay Ltd in 32nd place and J Supor Trucking & Rigging in 38th place. Both are based in the USA. All the best to these and the other companies in the table for the coming year.

It is very much a work in progress and will always be evolving and changing. We largely rely on the submission of entry forms completed by the companies listed. We are always interested to hear from companies that have not yet entered the Transport 50. If yours is one of them, please let us know and look out for the 2019 Transport 50 entry forms and calls for entries on the KHL web site during the second quarter of the year. You are welcome to inquire at any time about the next T50. 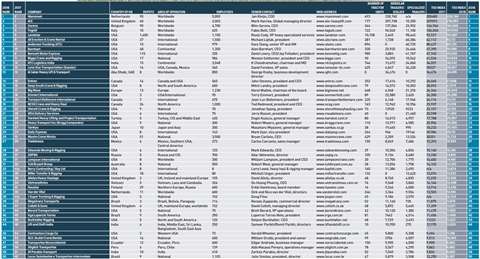