Island of waste to be 2025 World Expo site 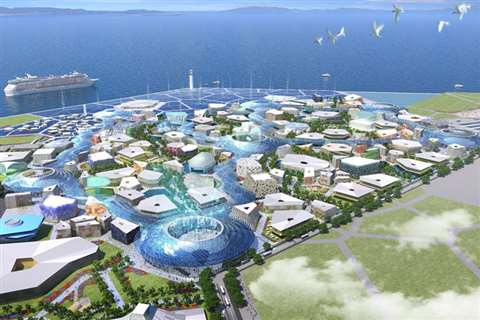 A potential design for the World Expo 2025 location in Osaka Bay, Japan

A large island in Osaka Bay, formed of nothing but levelled-off construction waste and connected to the mainland by bridge, is set to be the next tourist attraction in Kansai, Japan.

The project, known as Yumeshima, which translates as ’Dream Island’, is the intended destination for the 2025 World Expo.

Dubai is currently preparing for the 2020 World Expo.

The total investment required from businesses and the government is around JPY¥280 billion (US$2.6 billion) for the Expo and, if successful in its applications, could contain the country’s first casino resort, requiring additional funding in the billions.

The theme of the Expo is ’designing future society’, with a focus on health and sustainability. It is expected that it would draw in around 28 million visitors.

Building on the artificial island is not expected to be an easy task. The island is currently 3.9km2 in size, and around 1.55km2 on the south of the island would be used as the dedicated area for the Expo.

If the proposed casino development was to unfold then there would be a 0.7km2 section on the northern part of the island.

Many different architectural designs have been proffered by design teams, but there has been no chosen design as of yet.

The initial investment of US$2.6 billion would be used to cover the cost of the main construction and operations of the Expo. Building the main site is estimated to cost JPY¥125 billion (US$1.16 billion) and will be funded by three parties; central government, local government and the private sector.

An estimated JPY¥82 billion (US$0.76 billion) needed for running costs will be generated from the Expo ticket sales.

With this mass influx of visitors, further infrastructure will also need to be delivered. A further JPY¥73 billion (US$0.68 billion) will be invested in transport links, including a new subway station on the island.

Once completed the island hosting the Expo event is expected to generate JPY¥2 trillion (US$18 billion) in economic activity, according to projections by the local government.

In a bid to drive the planned casino resort, a law was passed in parliament during 2016 to legalise casino gambling in the region.

Though plans for this casino instalment are not as advanced as they are for the Expo, projections suggest that a casino resort in this location could generate around JPY¥380 billion (US$3.52 billion) a year in gaming revenue.

Despite all of these plans the Bay area is a known natural disaster zone. Typhoon Jebi recently tore through streets and homes in 2018, at speeds of 280km/h.

Kansai International Airport, which sits on a reclaimed island similar to the Yumeshima planned development experienced scenes of chaos when an oil tanker smashed into the connecting mainland bridge.

Should the plans and funding for World Expo 2025 be approved, it will be a priority for the government to bolster defences.