Jacobs Engineering Group Inc. through its joint venture with Aurecon, has been selected by John Holland and CPB Contractors consortium to carry out the engineering design for the US$5.1 billion West Gate Tunnel Project that is now proceeding after receipt of all environmental and planning approvals.

The project is located in Melbourne’s inner west and will become Melbourne’s alternative to the West Gate Bridge. 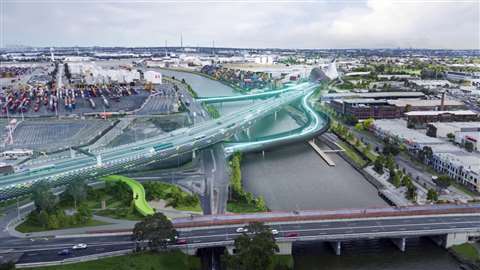 The West Gate Tunnel Project is expected to open in 2022

The design consists of two new three-lane tunnels, the widening of the West Gate Freeway from eight to 12 lanes, 14 kilometers of new and upgraded cycling and walking paths – including a 2.5 km raised veloway for cyclists – and nine hectares of open space and wetlands.

The project features a safer road design that includes express lanes to and from the West Gate Bridge, along with high-quality noise walls to reduce noise and protect privacy for the local community. Once completed, the project will deliver quicker and safer journeys, while removing thousands of trucks from local roads.

Construction is expected to begin in early 2018 and the new tunnels are expected to open in 2022.

“This is a significant transport infrastructure project for Melbourne and confirms the continued buoyancy of the Australian market,” said Jacobs Buildings and Infrastructure Asia Pacific senior vice president, Patrick Hill.

The Western Distributor Authority (WDA), an administrative office within the Victorian Department of Economic Development, Jobs, Transport and Resources, is responsible for the delivery of the West Gate Tunnel Project on behalf of the Victorian Government. WDA is working in partnership with Transurban to deliver the project as a Public Private Partnership.