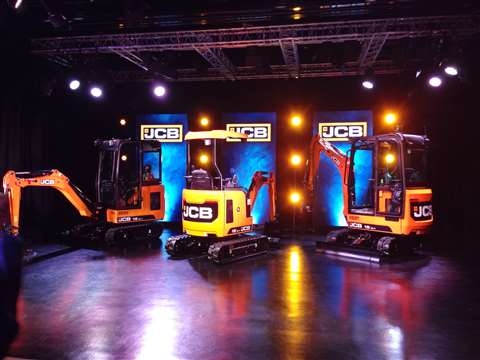 With operating weights of 1.6 to 1.8 tonnes, the new mini excavator line-up comprises the 16C-1, a conventional tailswing model designed specifically for the rental market, the 18Z-1, the company’s first zero tailswing model at 1.7 tonnes, and a high-performance 19C-1 model, aimed primarily at contractors.

At the launch, Tim Burnhope, Chief Innovation & Growth Officer, said the machines had been “designed in conjunction with the customer…with a completely new and totally consistent DNA throughout the range.”

Matt Fears, MD, JCB Compact Products, said it was the right time for JCB to turn its attention to opportunities below 4 tonnes.

In tackling these challenge, JCB extended the dumper’s wheel base, simultaneously lowering its centre of gravity and bringing down the height of the skip.

With the addition of a ROPS/FOPS Level II cab for greater operator protection, the firm claims to have revolutionised the segment with its new Hi-Viz Site Dumper concept machine.

The dumper is set to go into production at JCB’s headquarters in Staffordshire at the end of the year.

During the multiple launch, JCB also introduced its new reduced tailswing T4F 15 tonne crawler excavator, which promises fuel savings of up to 20% over the JZ140 model.