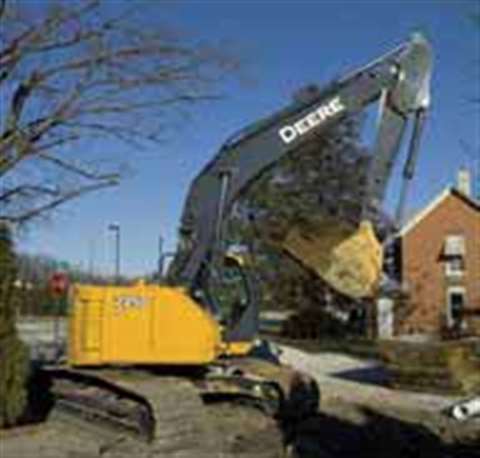 At the beginning of 2007, John Deere launched three D series excavators–the 160D LC, 200 DLC and 225D LC. While retaining many of the features to be found on their predecessors, the new machine also feature significant improvements, including faster hydraulics, a redesigned cab, undercarriage enhancements and a new cooling system. These improvements, says the company, deliver positive benefits in terms on improved productivity and uptime, as well as lower operating costs.

Service intervals have been extended to 5,000 hours on the hydraulic system and easy access oil and fuel filters are located in the pump compartment, allowing for easy changes.

A new compact excavator model has also been launched in the shape of the 17D, fitted with adjustable tracks that allow it to pass through a 1 m (3.3 ft) opening, but which when extended to over 1.27 m (4.17 ft) provide the machine with enhanced stability.

Where wheeled loaders are concerned, John Deere has upgraded four of its models, the 444J, 544J, 624J and 644J to include Tier III compliant PowerTech engines, as well as fitting new Teammate IV front and rear axles on the 544J, 624J, 644J and 724J. The 644J also now features the company's Quad–Cool system already available on the 444J, 544J and 624J. This system is easy to clean as well as being resistant to plugging.