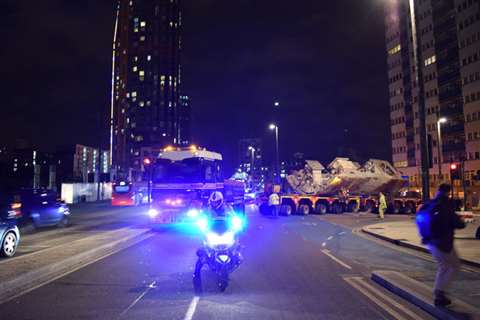 The Lee Tunnel is part of the Thames Tideway Scheme. It runs from Abbey Mills Pumping Station to Beckton Sewage Treatment Works under the London Borough of Newham in London, UK.

The dimensions of the components meant that the UK Highway Agency issued a permit for the sections to be transported directly to Tilbury Port in Essex. After extensive planning and route surveys, the parts were transported from Abbey Mills Pumping Station to Tilbury Docks along with police escort.

To assist with the transport, street furniture was removed and parking suspensions were put in place along the route. The sections of the TBM were transported over three weekday evenings. On arrival at the port, the components were lifted using a 750 tonne capacity Liebherr LG 1750 lattice boom hydraulic truck crane onto a WWL ALS chartered vessel. The sections were shipped to Rotterdam and transferred onto a barge and sailed along the River Rhine to a terminal close to the Herrenknecht facility. The pieces were then unloaded and delivered to the manufacturer by road.