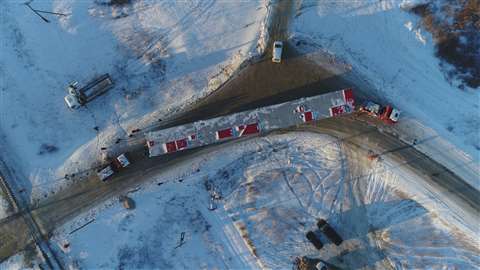 The ALE team negotiating one of many difficult manoeuvres on the complex 3,400 kilometre route across Kazakhstan

ALE has performed what it claims as the furthest and longest overland transport ever completed in Kazakhstan.

The heavy haulage company transported five out of gauge (OOG) items across the country. Measuring up to 42 metres long, the size of the cargo necessitated a complex and challenging 3,400 kilometre route.

Bound for a steel plant in Temirtau in the country’s north-west Karaganda region, the OOG items arrived on several vessels at a port in Bautino on the west coast of Kazakhstan.

The company used three cranes, including a new 750 tonne crawler, to unload the OOG items from the vessels and onto waiting trailers, so that the overland journey could begin.

Up to 26 axle lines of self propelled transport were used to transport each of the five OOG items. The operation comprised a single convoy and required the support of several local authorities.

ALE carried out numerous engineering calculations to allow the convoy to negotiate overhead obstacles and large structures, including roundabouts and bridges. More than 100 bridges were inspected to ensure they could hold the weight of the super heavy transport load, which included items weighing up to 150 tonnes.

Bridges that were deemed unsuitable were either reinforced or avoided by building temporary side roads to bypass them.

The abnormal load’s journey saw the transport team overcome gradients of 14 %, heavy snowfall, ice and temperatures of minus 30 degrees centigrade. ALE said that safety always remained at the core of the project and that conditions were continuously monitored, so the convoy slowed down if required. ALE also brought in specialist vehicles to clear heavy snow and apply substances to deice the roads.

The transport took six months to plan and 75 days to reach its destination. 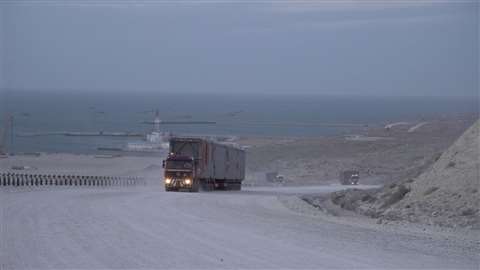