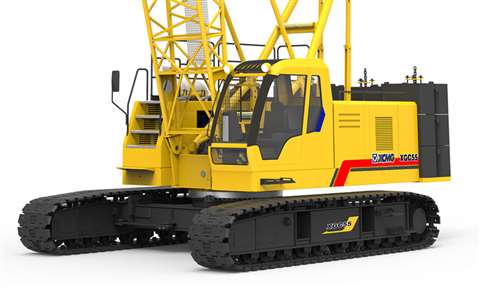 China’s XCMG has launched a trio of lattice boom crawler cranes in the XGC series between 55 and 85 tonnes capacity.

Easy transport was a primary requirement in the design of the 55 tonne capacity XGC55, 75 tonne XGC75 and 85 tonne XGC85. Removal of the track frames is unnecessary and counterweight slabs are a maximum of 5 tonnes so small auxiliary hoisting equipment can complete counterweight assembly, XCMG said.

All three models are based on the same platform. Interchangeable parts include their fixed jibs, single pulleys at the boom ends, counterweight, luffing mechanism, hydraulic pumps and main valve blocks. Benefits are to reduce the purchase, transportation and maintenance costs, the manufacturer said.

Operation of the XGC series is simplified by being able to change between main and auxiliary hook operation by means of a switch, the manufacturer said. Reliability, efficiency and reduced maintenance were priorities in the design of the hydraulic system, according to XCMG. Power for the three cranes is from 128, 154 and 200 kW diesels.