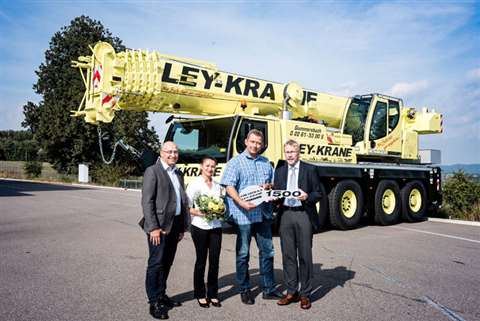 Company owner Markus Ley said, “As it is a 4-axle machine, it is very compact and can carry a great deal of ballast on the road. That means we can use the crane very flexibly without additional transport costs.”

Ley-Krane ordered the new unit with the VarioBase outrigger support control system and remote control. The Variobase is one of several features added to the model since its first incarnation, including speed-dependent rear axle steering, disc brakes and the new LICCON2 control system. Others are Eco Mode, new cabins and new wheels with single piece wheel rims.

Ley-Krane dates back to 1850 and is now managed by the sixth generation of the family. It operates a fleet of 15 mobile cranes with lifting capacities between 50 and 300 tonnes. There is a workforce of 30 and also a fleet of more than 200 aerial work platforms. The company will extend its capability upwards by adding a 450 tonne capacity LTM 1450-8.1. The 8-axle wheeled mobile telescopic crane model was launched in April 2016.