China-based LGMG has announced a renewed partnership with Germany-based PB Lift. The Chinese manufacturer produces PB’s Eco line of scissor lifts, and now its PB’s turn to offer its services and experience in helping to grow LGMG sales in Europe.

As Ares Song, international sales manager at LGMG said, PB’s role is essentially as a high-level consultant as LGMG seeks to approach the European market in the correct manner. “We do not want to damage the market by putting low priced machines into it. It’s important that all suppliers in the chain benefit from the market.” 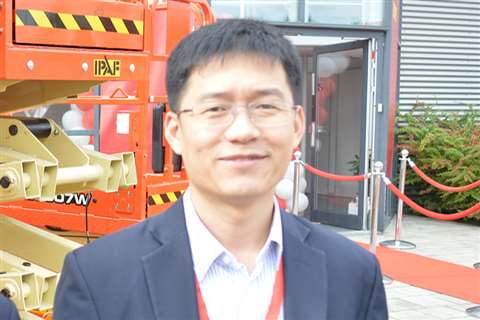 Part of LGMG’s strategy is to make products specifically for the European market and PB will provide ideas to help it do this. “We want to be up and running but in the proper European way.”

LGMG is ambitious and, as reported by AI last year, the compnay set up a European division in 2018, including a depot and service centre in the Netherlands. It is also bringing longstanding access professionals on board in the continent, including most recently Ronan Mac Lennan as sales manager for Great Britain, Ireland, Scandinavia and European key accounts and Erik de Bruijn, as technical and product support manager. Both were at Bauma and have recently moved over from GMG. Between them, they have decades of experience in the access industry.

They join Hans Aarse, senior adviser, previously with IPAF, he came out of retirement to work with the company, and Maurice Jassies, sales manager Benelux, both taking up their positions earlier this year at LGMG Europe, which was launched in September 2018.