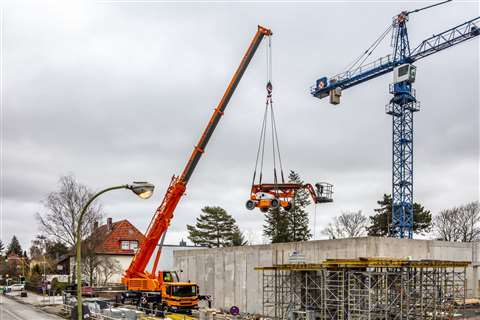 A self propelled boom lift was lifted over a roof by crane during the construction of a gymnasium at a primary school in south Berlin, Germany.

The 21m working height Niftylift HR 21 Hybrid articulated aerial platform was required to install safety nets inside the new gym. As the crane’s position in front of the building was constricted, it was not possible to extend all the outriggers in full. The two outriggers towards the load were fully extended while the other two were only extended around 50%. Liebherr’s Variobase variable support base, which is now available with LTF models, as well as LTM mobile cranes, was also used in the project with the LTF 1060-4.1. 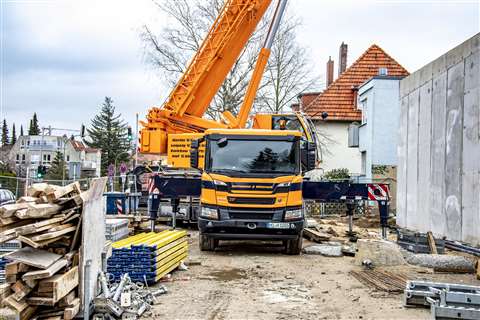 The company said that good communication between the crane operator Uwe Kreuzberger and marshal played a major role in positioning the AWP successfully. Kreuzberger was unable to see the load once it had disappeared behind the concrete wall and had to react solely using the commands supplied by Carsten Herfurth on the intercom.

Herrmann & Wittrock is part of the Wittrock Group and operates 50 mobile cranes from 10 sites across Germany. The company invested in 20 new Liebherr cranes in 2019 and 2020.