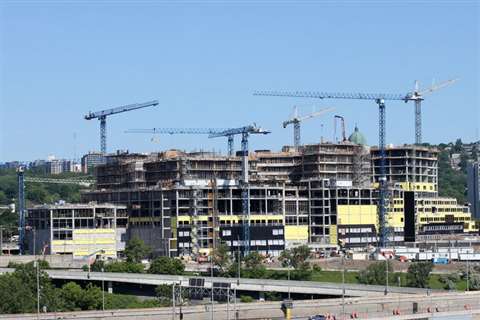 On site at the McGill University Health Centre are five Linden Comansa flat-top tower cranes, including four model 21LC290s and one model 21LC210

New hospitals being constructed in Montreal, Canada, are being built with the help of flat top tower cranes from Linden Comansa.

The Glen site project, is part of a public-private partnership agreement that was signed by the MUHC with a partnership formed by SNC-Lavalin and Innisfree. The main contractor for the projects is Alliance Formwork. The cranes were provided by distributor Linden-Comansa Canada (Location Comansa).

One of the two hospitals is the University of Montreal Hospital Centre (Centre hospitalier de l’Université de Montréal, known as CHUM), in the Quartier de la Santé (or Health neighbourhood) of Montreal.

On site are four Linden Comansa tower cranes, including a 21LC550, a 21LC210, a 21LC290 and a 21LC210. All have a capacity of 18 tonnes. The 21LC550 and the 21LC210 have been externally climbed with a hydraulic jacking cage. The cranes currently reach heights of 151 and 140 metres, respectively. The 21LC290 and 21LC210 were climbed using an internal climbing system, which had never been used in North America before, a company spokesperson said.

Carl DiChiara, Alliance Formwork engineer project manager, said, “Both cranes have been jacked up from an initial height of 69.3 metres to a final height of 137 metres. It was the first time we used the internal climbing system and I am impressed. The jacking-up worked very well and the learning curve was short due to the facility of its operation.”

Simon Drolet, Location Comansa tower crane engineer, said, “The new CHUM is a very challenging project due to the height of the construction. We had to climb each of the four cranes five times to reach the final heights. The strategic location of the 21LC550 on the site has been a great advantage for the erection and future dismantling of the other three cranes. The use of the 21LC550 for these tasks saves costs of auxiliary cranes, and helps to minimise the fully closing of the roads that surround the site.”

Once complete the CHUM will have 772 individual rooms, 26 hospitalisation units and 39 surgery rooms. Other facilities will include a library, an amphitheatre and a clinical administration building. Construction began in 2011 and it is due for completion in 2020.

CHU Sainte-Justine
The second project is an expansion project at the University Mother and Child Hospital Center. Two seven-storey buildings will house a new research centre and facilities for intensive care and surgery, with 14 surgery rooms and a neonatology unit.

On site are a 21LC400 and a 21LC290. A 21LC210 was also on site but this has now been dismantled using the 21LC400. Main work for cranes includes lifting formwork and assisting in concrete jobs. Both cranes have a capacity of 18 tonnes.

Simon Houle, Alliance Formwork engineer and project management director, said, “The use of flat top tower cranes allowed to limit the total height of all cranes, thus increasing the security of the entire project providing better visibility of the jobsite to the crane operators, and saving a huge amount of money in installation and dismantling.”

The Glen Campus
The other major project being constructed with the help of Linden Comansa is the McGill University Health Centre (also known as MUHC, or CUSM in French). The project is costing around C$1,343 billion (US$ 2.28 billion). It will host five institutions, including two children hospitals, a research Institute and a cancer centre.

On site were thirteen cranes, five of which were Linden Comansa flat top towers, including four model 21LC290 and one model 21LC210. Capacity is 18 tonnes and they are erected with freestanding heights from 46.6 to 74.1 m. The hospital is due to open in 2014.

The Shriners hospital for children
The final project is a new non-profit children’s hospital. It is part of the Shriners network and is being built alongside the Glen site. It specialises in treating children with orthopaedic needs and spinal cord injuries.