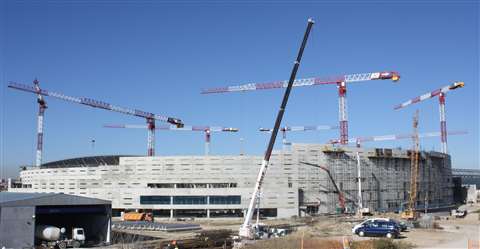 Runner-up in the 2016 UEFA Champions League Final, Club Atlético de Madrid of Spain plans to move to a new stadium at the end of the 2016-2017 football season, with a capacity of 68,000 spectators, 13,000 more than its curent ground, Vicente Calderón. It will also have more and better services for the fans, more parking spaces, and so on.

The new stadium, yet to get an official name, has been under construction since 2011, and has counted on the assistance of five Linden Comansa cranes, the property of Gruymsa and rented to construction company FCC. Gruymsa (Grúas y Maquinaria S.A.) is official dealer of Linden Comansa and one of the main tower crane rental companies in Spain.

Three of the five cranes are model LC2074 and two are model 21LC290. All have 12 tonnes capacity. Gruymsa began the erection of the cranes in July 2013 but, due to the proximity of the Adolfo Suárez Madrid-Barajas International Airport, installation to final height had to wait until special permission had been granted by AESA, the Spanish Aviation Safety and Security Agency. Finally, Gruymsa could climb the cranes to their final heights, being 52.1 metres for the smallest, up to 69.6 m.

A Linden Comansa 21LC290 is the only tower crane that remains at the venue but it will be removed in the coming weeks. Then, FCC will begin to build a spectacular roof that will allow 96 % of the Atlético de Madrid fans to enjoy the games under cover.