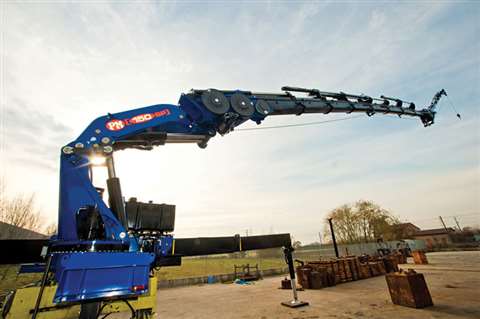 From standards on stabilisers to increased capacity demands, a number of regulations and trends are affecting the design and function of articulating loader cranes.

From a manufacturer’s point of view, designing a crane that meets these requests has its benefits, as a spokesperson from HMF Group explains, “The continuous development of the EN 12999, Cranes - Loader cranes and the incorporation of the EN 13001 standard improve the manufacturers’ opportunities for making cranes with even better design, performance and safety than before.”

A spokesperson from crane manufacturer Hiab, explains, “It’s essential for us to offer a system that assists, but not hampers, the crane operator. So this need of stability monitoring requires several new inventions in the control system.”

To meet demands on stability and for monitoring devices, Italian crane manufacturer Effer says it will launch five new models this year, including the Effer 505 and 455. These models have the same structure and components as the Effer 525, but have been fitted the DMU 3000 Plus and ESS device for stability and safety. The Effer 505 has an outreach of 21.7 metres and can be fitted with a jib up to 30 m. The Effer 455 has a reach of 21.74 m. Also new to the range is the Effer 375, which has a maximum reach of 26.4 m when configured with a jib.

In addition to the new models, the 80 tonne-metre Effer 855 has been updated and includes a Danfoss control distributor, DMU 3000 Plus and ESS system. It has a reach of 40 m and Scanreco and Hetronic remote controls are available. “In addition, cranes from the Progress range are now available with additional stabilisers,” the manufacturer adds. To make way for the new models, existing models 440, 470 and 850 will go out of production.

The latest model from articulating crane manufacture Palfinger is the PK 200002 L SH. Launched at the Bauma show in 2013, it can have up to eight hydraulic extensions and has a hydraulic outreach of 25.6 m. The model is also fitted with a quadruple stabiliser system; an additional front stabiliser and an extendable rear stabiliser have also been built into the crane’s frame. “The stabiliser system features stabiliser cylinders that can be tilted upwards to easily overcome obstacles such as walls and fences. All functions are controlled by the operator remotely,” explains a Palfinger spokesperson.

The model also includes the high performance stability control (HPSC) system, which calculates the working range from 0 though to 360 degrees for any stabiliser situation and uses sensors to monitor the vehicle’s stability based on the crane and vehicle’s real-time data. The crane’s lifting power is then adjusted, depending on its stability and the position of the crane boom.

Crane manufacturer Atlas has also introduced new models with stability in mind. New to the range is the 440 VCS. Designed for the North American market, the 440 VCS can lift 1 tonne at 22 metres. “This is the most powerful and effective long reach V-boom crane ever produced by Atlas. To achieve sufficient stability, a new 7.4 m wide stabiliser beam has been designed for this crane,” a spokesperson points out.

Simplified designs
New from Italian manufacturer PM are models ranging in capacity from 26 to 40 tonne-metres, including the 26.5 S, 27.5 PX, 28.5 SP, 30.5 SP, 32.5 PX, 36.5 S, 38.5 SP and 40.5 SP. “These cranes are not ‘single’ units but a complete new segment that includes models for markets worldwide, including single and double link cranes, rack, pinion and continuous slewing systems and different safety devices levels,” the manufacturer says. Compared to previous models, the new cranes are lighter and more compact and are fitted with axle tilting stabilisers that do not require space on the truck chassis. “This design was introduced due to the new Euro 6 models of trucks which do not have enough space,” a spokesperson adds.

The latest models from crane manufacturer Hiab, part of Cargotec, include the X-HiPro 192, X-HiDuo 188 and S-HiPro 130. “The new models have user friendly features, such as the load stabilisation on the 192 and semi-automatic folding and unfolding on the 130 model,” a spokesperson says. The 188 and 192 models are in the 18 tonne-metre capacity range and are operated by remote control.

“A new, simplified design also means that the installation process for the new cranes has become smoother, resulting in lower installation costs and shorter installation time for the customers,” Lotta Clausen, Hiab communications director, adds. “For example, fewer bolts are required to mount the crane on the truck, and the wider stabiliser spread can make installation of additional stabiliser legs unnecessary.”

From Italian crane manufacturer Cormach is the 230000 E9 JC4. Designed for general lifting duties, including recovery unit for road accidents, the crane is fitted with a hydraulic winch and can be configured with a fly jib.

Also from Cormach is the 135000 X E9 F186 ASC PLUS RC L5. “This crane is installed on a 5 axle tractor unit and is equipped with a double load limiting device that permits the lifting on the front of the cabin,” a company spokesperson says. “Additional stability is given by the X stabilisers configuration and by the L5 stability control system, which reads the stabilisation condition and activates different lifting capacity diagrams accordingly. The lifting capacities are based on the stability condition in that specific condition and on the maximum lifting condition.”

Manufacturer Fassi, also from Italy, launched two new models this year. Fascan International, the US distributor, showcased several models of new Fassi cranes at the ConExpo exhibition in Las Vegas in March 2014. On show was the heavy-duty articulating crane F950RA.2.28L426, and the F120B.2.25 light-duty articulating crane. Also on display was the Fassi Stability Control (FSC) system, which automatically limits crane operation when pre-set stability conditions have not been met, a company spokesperson explains.

New electronic systems that read stability or other crane data can be found on a number of new models. Crane manufacturer Palfinger, for example, introduced two new systems for the SH crane models. The systems include the rope tension control (RTC), made for the PK 27002 SH, and the new synchronised rope control (SRC) for the PK 10002 SH. The systems are designed to help with operator comfort and safety, the manufacturer says.

“The RTC is an automatic rope tensioning device that makes it easier to fold and unfold the crane with the rope reeved in and the fly jib (additional knuckle boom) mounted,” a spokesperson from Palfinger explains. “If any crane movements are performed that affect the rope length, the system electronically and automatically adjusts the rope length to match.”

“Similar to the RTC, the SRC system automatically adjusts the rope length and maintains a constant distance between the pulley head and the hook block during operation of the rope winch,” a Palfinger spokesperson adds.

Saving weight
Other areas of focus for manufacturers has been to design a crane that has a high ratio between weight and performance that is easy to maintain, as a spokesperson from HMF explains, “Compared to previous models we have saved a lot of dead weight due to the use of high grade steel which make the cranes even more feasible since the truck will be able to transport more.”

New from US crane manufacturer IMT are the 9/65, 10/72, 11/78 and 12/86 models. John Field, Iowa Mold Tooling (IMT) product manager for material handling, says, “The new 9 to 12 tonne-metre articulating cranes with higher lift-to-weight ratios have been designed to increase the efficiency of loading and unloading. The new models are made 10 to 15 per cent lighter than previous models without sacrificing strength, allowing for more payload capacity. These cranes give users the ability to haul more materials. Mounting space required has also been minimised, expanding truck configuration possibilities.”

The models are made from ultra-high tensile steel and have capacities from 3.8 to 4.64 tonnes. Each crane offers up to five hydraulic extensions for application-specific reach. In addition, a single-power (SL) plus link-arm system has been fitted to provide high lifting capacity when the boom system is fully extended, the manufacturer adds. It is suited for loading and unloading tasks at a low height away from the vehicle and is suitable for fast-grab work.

A dual-power (DL) plus link-arm system, which offers increased lifting capacity, has also been fitted. “The system is suited for long reaches and lifting in high positions with demanding equipment, such as fly-jib and winch, and works particularly well with the stretch boom system at any height and any reach,” Field adds.

Other features include a new over bending design, which means the working area between the main boom and the jib is no less than 195 degrees. Also fitted is the rated capacity limiter (RCL) 5300. “The RCL system monitors the crane’s load moment, operation and function,” Field explains, “In an overload situation, the system warns the operator and interrupts the distribution of oil for crane functions, while allowing functions that reduce load moment to remain operational. Customers also have the option of an Electronic Vehicle Stability (EVS) system, which monitors and secures the stability of the vehicle during crane operation.”

Future trends
The demand for articulating loader cranes with increased capacity is on the rise, and customers are leaning towards models at the higher end of the capacity scale. A spokesperson from HMF Group, explains, “We have traditionally been strongest in the mid range cranes from 10 to 25 tonnes. This is still our most important segment; however, after launching a number of new models in the 30 to 50 tonne range, we saw a strong demand for cranes in this range.”

Other areas prompting design changes are new emission standards, such as Euro 6, which will become effective from September 2014. “This new emission law means additional devices and components on the trucks which possibly will be obstacles with regard to crane installation,” a spokesperson from Atlas pointed out, “As to whether this can be solved by simply using foldable legs, we will have to wait and see how the relevant truck manufacturers implement this new Euro 6 norm.”