Heavy lift and transportation specialist Mammoet has announced a collaboration with deep water marine terminal Port of Coeymans. The port is located ten miles south of Albany, in the state of New York, and 100 miles north of New York City. The port is owned by Carver Companies, which has interests in the construction, mining, martime and logistics sectors.

According to Mammoet the collaboration allows it to access to the port’s 400-acre terminal. This enables it to offer storage options, load in and load out services, and local barge supply. Mammoet said it also means it is well placed to serve forthcoming offshore wind projects in the region.

Mammoet said that the collaboration came about following the development of a working relationship with Carver Companies when it utilised the Port of Coeymans for previous projects including the roll-off operation of a fully assembled HRSG module and the Willis Avenue Bridge project.

In addition, Mammoet has similar existing partnerships with the Port of Freeport, Texas, and Theodore Industrial Port, Alabama. It says this means it now has coverage along both the Gulf Coast and the East Coast of the USA. 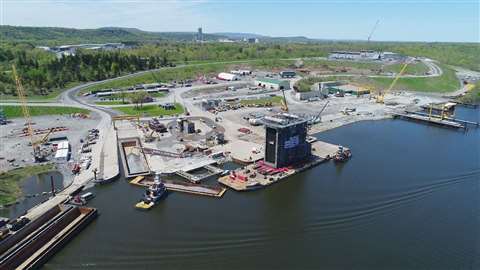 Aerial view of Mammoet transporting a heat recovery steam generator at the Port of Coeymans, USA