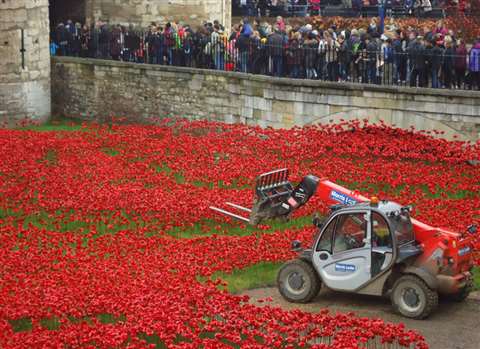 UK plant hire company Morris Leslie has been using a Manitou MT625 telehandler to assist with the poppy installation and its removal at the Tower of London.

Five million people have visited the Tower to view the 888,246 poppies each signifying a British and Colonial military fatality in the First World War.

Since 12 November a group of 11,000 volunteers have been removing 75,000 poppies each day from the moat of the Tower of London.

Each poppy has been sold for £25 raising millions of pounds for six service charities: The Confederation of Service Charities (COBSEO), Combat Stress, Coming Home, Help for Heroes, Royal British Legion and SSAFA (formerly the Soldiers, Sailors, Airmen and Families Association).

Larger hydrogen engine from China Yuchai
At nearly 16 L, new YCK16H designed to deliver up to 560 hp
Loading...
Previous Next ×