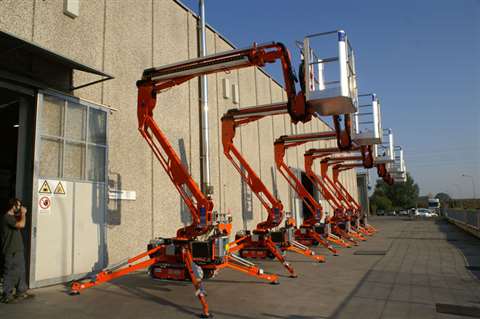 Easy Lift has reported a successful year for its sales of tracked platforms. Its revenue in 2016 for spiders is €8 million, representing a 20% increase year-over-year.

The Italy-based company said it had grown its relationship with rental majors Boels and Collé Rental & Sales during 2016 and increased its presence in the US and Canadian markets thanks to its distributor in the continent Up Equip. Sales in Asia have also been up with 15 units delivered to one of China’s biggest power companies, plus additional units to shopping malls and airports in the region.

The sales come on the back of two new machines launched during 2016, which also marks its 10th anniversary. The RA15 model, presented at Bauma Munich in April, is a double pantograph spider, the first-ever designed by Easy Lift. The 15m working height machine offers 7m lateral outreach and has a capacity of 230kg with 360° rotation. The standard version of the platform is equipped with two engines: electric and gasoline or diesel internal combustion, with cage rotation via a hydraulic lever distribution system. Standard equipment includes the availability of air and water on the basket and extendable tracks powered by a unique ergonomic cable control.

The RA26 was introduced recently at the TCI Expo in Baltimore, US. The company says this is the first self propelled tracked platform with double telescopic arm and Easy Lift’s jib. Features such as a maximum height of 26m, outreach of almost 15m and capacity of 230kg in a quick-release cage measuring 1.4m wide. The RA26 is designed to be a compact machine at 89cm wide in closed configuration, 1.9m high and 6.75m long. Available with two different diesel engines, it is also available in electric version with lithium batteries, or hybrid.