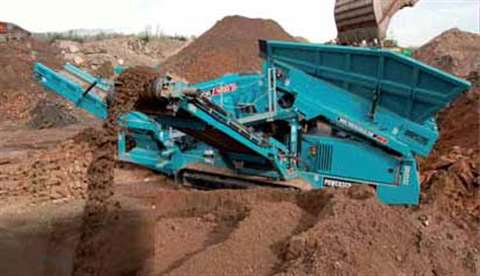 The city of Liverpool is gearning up for its role as city of culture in 2008 with major construction work currently going on round the city. Grundy is involved in much of this and is urrently fulfilling the groundworks contract for Livesey Group on its city centre site in Duke Street. A basement pit is being created for an apartment block with underground parking. Grundy is excavating down to 6 m (20 ft) to produce the basement area of 30 x 35 m (99 x 115 ft). Over 3,000 tonnes of sandstone, found at the 3 m (10 ft) level, and old foundations from recently demolished buildings is being transported to Grundy's recycling station in Widnes.

Here, Grundy has added a Powerscreen Warrior 1400 mobile screen to separate and stockpile the raw waste material, at 80 tph, to make 6F2 filler for road building.

Currently. Grundy says that it is recycling more than 70% of saleable material from the job, and is only sending clay and some subsoil to landfill.

Grundy also operates a Powerscreen Chieftain 1800 and a Titan 1800 with a static trommel and crushing plant.