Metso – Evolution through the years

In early June, the town of Mâcon was already festooned with banners advertising its role as the start point for the eighth stage of the upcoming and iconic Tour de France cycle race.

More than a month ahead of the July 13 départ, the town of 34,000 people in east-central France was preparing to send more than 150 riders on their way to Saint-Étienne 200 km (125 miles) away. It was Mâcon’s first hosting of the Tour for seven years, and a moment to be savoured. 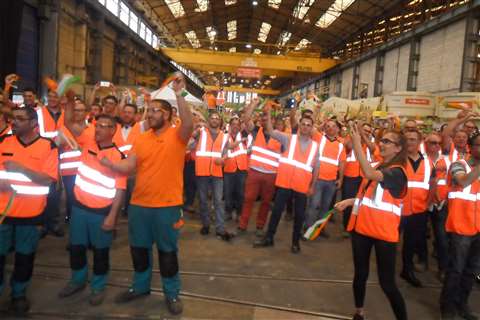 Elsewhere in Mâcon, a rather different – but for those involved, equally significant – milestone was being observed, and one even longer in the making.

The local branch of Finnish industrial machinery company Metso had reached the significant figure of 10,000 Nordberg HP cone crushers sold globally since the product, which is claimed to be the most popular modern cone crusher in the world, was introduced exactly 30 years earlier.

Around 350 people work at Mâcon, out of a total of 4,000 employees in the Metso France workforce.

Most of those 350, and possibly even a few of their friends, were present for a special ceremony to mark the handover of HP cone crusher number 10,000, to aggregates and asphalt producer and urban infrastructure development company Eurovia. The customer estimates it has around 100 of the crushers working throughout France, or 1% of Metso’s total production since 1989.

Like the first model ever sold, it is a HP300, designed to combine high productivity and long service life with low operating and wear costs. Together with the smaller HP200, it accounts for more than half of all the crushers in the series sold so far.

“The HP is undoubtedly one of our most widely used innovations,” said Arto Halonen, vice president, aggregates crushers at Metso.

“It’s a technology that has been evolving throughout the years to meet customers’ changing needs, making their operations more successful through proven performance and reliable output. That’s most likely why HP has become an industry standard for a variety of aggregates applications.”

The origins of the HP Series – its initials come from the words “high performance” – go back to Milwaukee, USA in the 1980s.

According to Metso, the technological breakthroughs by the Nordberg research programme redefined crushing performance, providing the basis for a new type of cone crusher introduced, and the Nordberg High-Performance cone crusher series was born.

The historic equipment is unveiled

Today, HP cone crushers are engineered and manufactured in Mâcon, with additional manufacturing in Brazil, China and India. Metso believes that a versatile crusher is ideal for a range of fixed and mobile applications.

“Know-how from developing the HP and from thousands and thousands of customer applications around the world has played an integral part in our research and development initiatives in crushing,” Arto continued.

This versatility is reflected in the geographical spread of the machines currently use. Of the major market sectors, North America, Europe and Asia/Australasia account for 25% of global sales each; South America has 15% and Africa 10%.

Product manager for the HP series Ilkka Somero – the position is a significant one; Ilkka is only the eighth in the past 30 years – said: “We’ve been to the North Pole and there’s nothing to be crushed, so we have no products there. And we didn’t see anything in Antarctica, but there’s always a chance!

But there are several HPs working in Greenland and northern Canada, that have adapted very well to different environments.”

For Arto Halonen, the landmark HP300 is about the longer term.

“This is an important milestone for Metso. We want to thank our customers for their continued confidence in us during the first 30 years of the HP journey and look forward to explore new development possibilities in the years to come.

“Our future is the focus. We celebrate our history, but we are focused on the future of the HP crusher. We’ve proved the technology to the market, now we want to continue to develop, continue to introduce new features, not just in the static range but in mobile crushers as well.