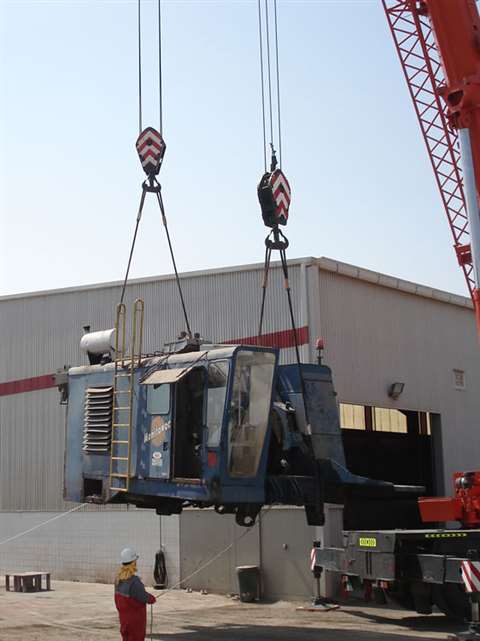 A Manitowoc 4100W crawler crane, owned by offshore construction company Valentine Marine, is back in use again after being refurbished by Encore in Dubai, UAE.

The crawler is used to build offshore oil and gas structures and offshore sea defences, a spokesperson said. Having been in use for more than 21 years at sea, the 230 tonne capacity crawler had suffered corrosion on the chassis and needed to be completely rewired.

At the Encore facility, the 4100W was dismantled and inspected. All the major components were then reconditioned, reworked and rebuilt, a spokesperson said. The crane was also rewired and fitted with a new cab. The corrosion on the chassis was neutralised and marine-environment paint was applied.

Somasundaran Akkappilly, Manitowoc workshop manager, said, “The crane was working well, but it was showing signs of corrosion due to the tough marine environment and long working hours it’s been put through for two decades.

“It is very satisfying to see one of our older cranes roll out of the workshop ready to give its owner a second term of productive service,” he added. “It’s been a painstaking process but I am pleased with the results and we are looking forward to tackling our next challenge.”

A team of six Manitowoc Crane Care engineers carried out the refurbishment. The crawler is now back at work on an offshore oil field off the coast of Abu Dhabi, a spokesperson said.