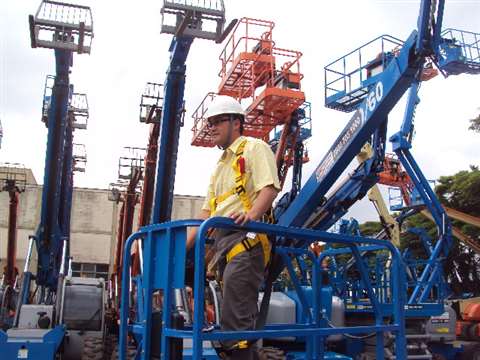 Mills Rental is the biggest access rental company in Brazil and has been growing rapidly over the past five years. Kariya attended the 2012 Summit in Rome, where his company won Rental Company of the Year.

The IPAF Summit will be followed on that evening by the International Awards for Powered Access (IAPAs), which areorganised jointly with Access International and are expected to attract more than 400 attendees.

These high-profile speakers are expected to be a major draw for delegates the well-established Summit and IAPAs are held in theU.S. for the first time.

DeFeo's keynote address will examine what responsibilities manufacturers and the industry have in providing support and backup to aerial work platform equipment throughout the lifecycle of the machines. His presentation coincides with a rising focus on the residual values of machinery, seen against the increasing age of fleets in the US and Europe.

DeFeo has more than 20 years of management and operating experience at Terex. Among other appointments, he also served as a director of United Rentals until June 2005. He has been inducted to the Association of Equipment Manufacturers (AEM) Hall of Fame and has served as chairman of the AEM.

"We are also delighted to welcome back Michael Kneeland to the IPAF Summit," said IPAF CEO Tim Whiteman. "Michael first addressed the IPAF Summit 2009 in Dublin, giving valuable strategies for rental companies then fighting the crisis. The consolidation and current changes at United Rentals and RSC will provide a rich area for discussion."

The IPAF Summit has built up a tradition of challenging pre-conceptions and providing delegates with valuable take-home messages that contribute toward a professional and safe powered access industry. The full programme and speaker line-up will be announced later this year. The Summit is held in English, with simultaneous translation in Spanish and Portuguese. Attendance is free and delegates should register in advance.

The IAPAs, organized by Access International, Access Lift and Handles and IPAF, celebrate and reward excellence, innovation and best practice in the powered access industry. Award categories range from products and projects, to rental companies and after-sales service. Winners and finalists are chosen by a top-level, independent judging panel.

More information on the Summit and IAPAs, including award entries, dinner bookings, venue and accommodation, will be available shortly at www.iapa-summit.info

The IPAF Summit and IAPAs 2014 will be held in the UK.