More for Mammoet in Siberia 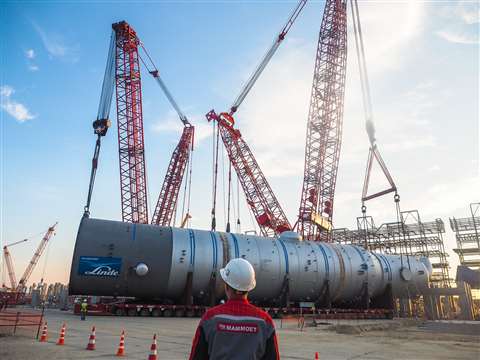 Mammoet Russia has won more work on what it describes as Russia’s largest modern petrochemical facility, in West Siberia.

The extended contract is from PJSC Silbur, Russia’s largest gas processing and petrochemical company. It covers unloading more than 300 large and heavy components, weighing a total of more than 20,000 tonnes, from the river port in Tobolsk. Mammoet will then transport and install the components at the ZapSibNeftekhim petrochemical complex construction site.

For a year Mammoet said it worked with PJSC Sibur on ensuring that operations were executed safely and met all deadlines. Mammoet unloaded more than 200 oversized and heavy components, weighing up to 917 tonnes. The journey was more than 23 km to the site where Mammoet lifted and installed the components. Two were 106 metre-long pyrolysis columns, each weighing 917 tonnes.

Mammoet said it increased efficiency by optimising its equipment choice, early planning of logistics and finding ways to reduce disruption to site traffic.

In the work this year, Mammoet said the components are lighter, with the heaviest at 480 tonnes, but there are more than 300 of them.