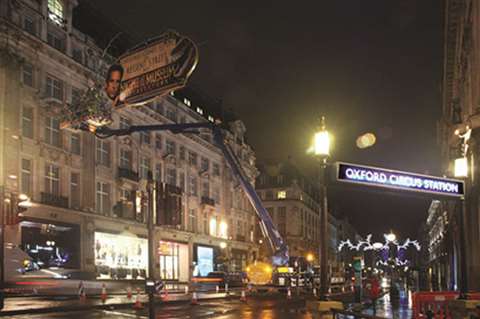 The versatility of truck mounted platforms enabled Nationwide Platforms operators to drive the machines in and out of location easily, as well as move them to the desired

location, said the company. This feature was a key requirement due to the limitations of this busy London street, which could not be closed for the installation.

The truck mounts have a working height of 38 m and a horizontal outreach of 27 m which was utilised to hang the lights up to heights of eight m. In total 27 lines of lights were hung along a mile stretch of Regent Street.

Nationwide Platforms used a winch attachment on the T38B to ensure each of the decorations could be securely moved into place.

The Regent Street lights were switched on by pop band Take That on 16 November and will be illuminated until 6 January 2015. Nationwide Platforms will also work with Piggotts to dismantle the decorations.