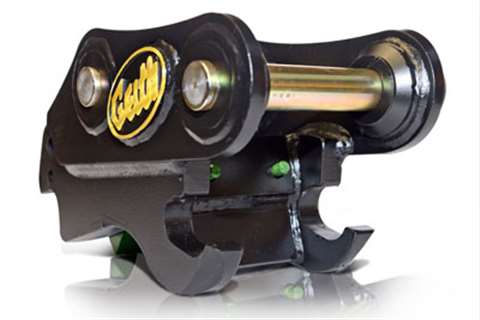 Coupler and attachment manufacturer Geith has a new mechanical coupler, while two others are expected to be added later this year.

Other new Geith products at Intermat in Paris include a compact tilt bucket, a tilting coupler, and a quick couple control system.

Designed for use on compact excavators ranging from 2 to 4 tonnes, the new mechanical coupler is designed to increase the efficiency and productivity of a mini excavator with its single visit quick release, and ease of use and low maintenance.

Jürgen Gremez, global sales and marketing manager, said that an attachment could be picked it up and secured in one easy movement. An audible sound and two visuals confirms to the operator that the attachment is properly engaged and in a safe position. The release tool provided is used to disengage the dual locking system.

The ability to reverse buckets is said to increase versatility while the low tip radius maximises breakout force. Geith added that the fast release mechanism ensured speedy operation and ease of use.

It said that operating the new coupler with standard pin on attachments – with fixed centres – made it a cost effective and economical solution.

Two other mechanical couplers – one for 1 to 2 tonne and one 4 to 6 tonne excavators – will complete the range and will be launched in 2015.

The Geith Quick Coupler Control system claims a simple and safe operating sequence, and the IP65 and CE compliant device is said to satisfy present and developing safety requirements (ISO 13031).

The new compact design is complete with a wiring harness for plug and play installation, which Geith said saved time and money. The new control box, mounting bracket and wiring harness will be supplied as standard in all full hydraulic hose kits.

“It can be mounted with a suction pad or bolted on,” said Gremez.

Among the key features is a Bypass Operation which allows the removal of attachments such as pallet forks without having to curl the coupler to release the attachment.

Gremez said, “There are four buttons – on/off, open, close and bypass. The bypass must be pressed and held for seven seconds so it can’t be operated by accident.”

The auxiliary output and audio warning are among additional safety features.

The new compact tilt buckets are aimed at increasing the adaptability and productivity of excavators for land clearing, ditching, slope work, backfilling and waste handling applications.

They are available in a variety of widths and capacities for machines ranging in size from 1.5 to 9 tonnes.

Features include an optimum pivotal design providing a 90° tilt – 45° in either direction – and a single hydraulic cylinder with mud guard protection to protect the cylinder rod and hose fittings.

Geith said it would continue to offer its full range of dual cylinder tilt buckets from 2 tonnes up to 29 tonnes for tougher applications.

The new Geith tilting coupler, powered by PowerTilt, is said to be suitable for excavators from 6 to 25 tonne, and the company added that it would increase productivity by using “the best of both world technologies” – the PowerTilt from Helac and the Geith Quick Coupler.

Geith said the operator could safely change attachments from the cab, while productivity could be increased thanks to the tilting feature, up to 180°. Less repositioning of the excavator is required when the machine is equipped with such tilting tool, it said.

The coupler provides both a front and rear safety locking mechanism to secure both attachment pins. The powerful spring-activated safety lock system works in all types of severe and dirty environments.

The variable pin centre design allows easy pick up and change of the widest range of OEM attachments, said Geith, adding that its patented “curl to release” control system guaranteed the attachment was released only in a safe position.