New generation: Caterpillar's latest dozer, the D6K, under the microscope 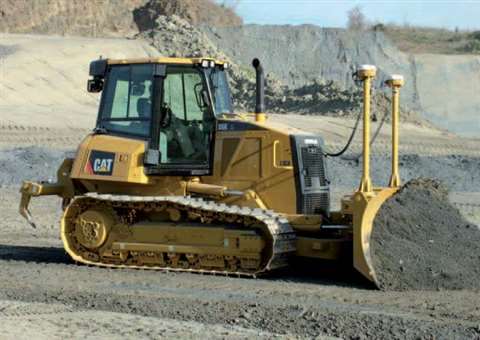 The D6K dozer is the first of a new K-series range which will be rolled out during 2007.

Apart from its sleeker looking, more modern design, Caterpillar's latest dozer does not look too different from its predecessors. But look a little closer and it becomes clear that it is a totally redesigned machine, and according to Cat vice president Mike Baunton, that includes the process that was used to design it.

“The new D6K is the first of our new K series dozers and will be followed by another three models later this year,” said Mr Baunton. “They are also the first Cat machines to use a more integrated design approach and as a result the machines are easier to build than the previous generation.

“During the research and development phase we looked at the design processes used by the automotive industry and have been working to use these to streamline our own approach to design. We also had a more integrated design team involving people from the production side, as well as the design engineers, throughout the process.”

The new 12,8 tonne D6K, which replaces the D5N model, is powered by a 93,2 kW C6.6 ACERT engine – a smaller unit than used in its predecessor but one which delivers more power and higher torque. The dozer also features a new electronically controlled hydrostatic powertrain, which offers independent power and control of each track to offer fast acceleration and infinitely variable speeds.

The new K series has also been designed to improve usability and function. Electro-hydraulic controls are seat mounted and there are 18 language options for the in-cab message centre, the optional GPS AccuGrade system is fully integrated and is designed to be ‘plug & play', while all daily checks can be carried out from ground level.

The new D6K will be built at Cat's factory in Grenoble, France but the forthcoming D3K, D4K and D5K dozers will be built in Japan.

Also new to Cat's range this year are the D-series wheeled excavators. The five model range offer operating weights of between 13,6 and 22 tonnes and are all powered by ACERT engines, which offer +10% more power than the engines used in the previous C-series.

Not only are the new models more powerful than their predecessors, they are also more comfortable and easier to use. The new cabs are available with an air cooled seat with vertical and horizontal suspension and a rear view camera improves site safety. The front suspension has a ride control system to damp movement and allow faster travel. It also helps to reduce wear. An automatic lubrication system for the upper frame and front bearing parts has also been added to reduce the daily maintenance and keep the machine in optimum condition.

The new D-series excavators are available with a factory-fitted tilting/rotating coupler and there is also an off-set boom option, which allows the machine to dig close to obstructions.

Following on from the launch of Cat's 740 Ejector articulated dump truck (ADT), the company has now added a smaller 28 tonne payload 730 Ejector to its ADT range. The new ADT is powered by a 237 kW C11 ACERT engine and features the same self-cleaning ejector system as the 740, which allows it to dump on the move, without raising the truck body.

New for the road construction market are the AP665 paver and CB14 asphalt compactor.

The new 19 tonne paver is available with either steel tracks or with MTS tracks, which offer significantly higher travel speeds. According to Cat, the machine has the longest and widest tracks on the market, which not only improves stability but also helps create a smoother finish.

The 129 kW C6.6 ACERT powered paver can be operated from either the left or right side of the machine by sliding the control across. For extra visibility the seating position can be swung out over the side. The standard paving range is 2,55 to 5 m, but can be extended up to 8 m, and is available with either an electrical- or gas-heated screed.

The new CB14 double drum vibratory compactor range is aimed at the rental market and is the latest application to benefit from Cat's AccuGrade system. The CB14 version of AccuGrade is for use with soil compaction and links the stiffness to GPS co-ordinates to allow density of the surface to be mapped in real time. The machine is available in three sizes – 800, 900 or 1000 mm width drums – or with an offset 900 mm front drum without a right-hand support to allow fully flush compaction.

Despite the large number of new models already launched this year, Cat has confirmed that it will have others to unveil at this year's Bauma exhibition in Munich, Germany.

But what kind of machines can we expect from Cat over the next few years? “We're not quite ready to adopt a completely computer based design as the automotive industry do, but I think in a few years time we will be significantly closer,” said Mr Baunton. “Designing cars by computer is easier than construction equipment, as details such as the size, terrain, engine size are fairly fixed for cars but can be quite variable for construction equipment.”