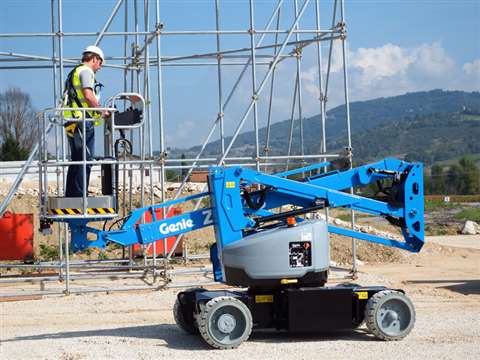 Genie has opened its first testing facility in Europe for new products and introduced the initial production model of its all-electric Z-33/18 boom.

Built in Europe at Genie’s factory in Perugia, Italy, to suit the needs of European customers, The Z-33/18 is the first model to be designed and manufactured outside the USA. In the past, all Genie models went through the research and design process in the USA before being introduced to the European market.

First launched at APEX in June, the 12 m working height Z-33/18 is now production-ready with around 100 models already ordered, said the manufacturer. It is designed for indoor and outdoor maintenance applications and well-suited to sensitive surfaces where space is restricted.

The articulating boom weighs 3640 kg and offers a ground clearance of 15 cm (5.9 in). Key features also include solid non-marking or multi-surface tyres as option, long working cycles due to low-consumption AC drive transmission, a tight turning radius, the ability to drive at maximum height, plus Genie FastMast boom system that shortens ground-to-top lifting time. An ANSI version for the US market will be launched soon.

The new telehandler and platform testing area adds to Genie's current facility in Redmond USA and demonstrates its interest in developing products in the EMEAR region. Genie currently produces 35% of machines sold in in the EMEAR at the Perugia plant.

Jo George, Terex AWP’s vice president and managing director of EMEAR, said the company had invested a large amount of money in the design, research and production of products in Europe for Europe.

He also said that different models could be produced in different parts of the world, namely its US, European and China facilities, to meet regional demand. For example, the initial ANSI version of the Z-33/18 is likely to be manufactured in Perugia, but if demand becomes high in the US, production of the model may begin there.

“Genie is changing,” said Mr George, “We are increasingly global and servicing our customers locally. [Perugia] is the centre of our European manufacturing operations and will be a very important part of the future.

“The challenge of manufacturing globally is that you have to meet demand and you cannot produce every product in every part of the world. We are trying to balance between the high volume products we know we can supply globally, which we will produce all around the world, and products that will be moved to a certain region.”