According to Hiab, both modules are pre-manufactured and designed to reduce body installation times and costs. Both have a weld-free bolted construction with parts that are easy to remove and replace, Hiab added.

Hiab explained that its BodyWorks concept is based around three key modules – headboards, wheelarch modules, and rear sections – and that by using it, vehicle body installation time can be reduced by 75 percent. The system is light and includes all mandatory parts such as side raves, crossmembers, lashing points, and floor. In addition, it can be specified with toolboxes, mudguards, drop steps, working lights and wide load signs. Hiab said customers can choose between three packages depending on which add-ons they want.

Hiab BodyWorks is only compatible with Hiab FrameWorks, a pre-manufactured ready-to-install subframe which Hiab claimed also reduces the installation time of the frame by up to 75 %.

Installation of the BodyWorks system is carried out at Hiab’s factory installation centre in Meppel, The Netherlands, which serves customers from all over Europe.

Hiab’s described its T-Body system as ‘a ready-to-go kit’ for dealers and bodybuilders which can be installed in around four hours. The T-Body can be used for the installation of any T-009 to T-038 cranes on L2 and L3 length chassis. The T-crane can be installed on any corner due to the subframe, which includes an integrated stabiliser beam.

Commenting on the systems, Marcel Boxem, director of heavy loader cranes at Hiab, said, “When customers buy a crane, they want it on the road as soon as possible, while body-makers want to serve as many customers as possible. Our new modular installation systems for truck bodies reduce installation time significantly and their weld-free construction makes them quicker to install and easier to maintain.” 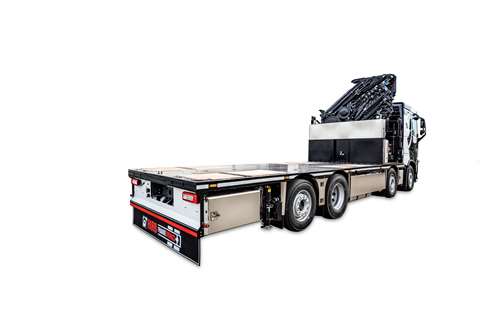