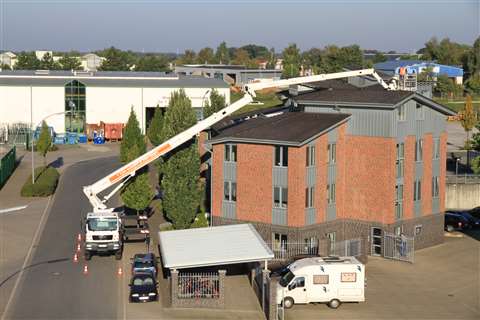 The rotating, telescopic basket of the new Ruthmann Steiger T 380 in action

Ruthmann is completing its Height Performance range with a 38 m model just launched and a 68 m version to follow in a few weeks.

The T 380 truck mount has a 38 m working height and a 31 m maximum outreach. According to the company, compared to other platforms in that class, the T 380 provides 5 m of additional reach when working at 34 m. It is the smallest in the six-model range and is mounted on an 18 tonne, two axle 2 x4 or 4 x 4 truck. It offers a 600 kg basket capacity.

Flexibility is a key feature, attained through the long upper boom and moveable jib, both of which are features across the Height Performance range, added the manufacturer.

This month Ruthmann will also launch the 63 tonne working Steiger T 630, which will complete the range. Details of this final model will follow soon.

A spokesman for the company told AI that exporting the boom in kit form was an important part of the sales tactic for the Height Performance truck mounts. The booms are then mounted on a local chassis. Although the manufacturer delivers the range fully mounted too.

“They can be placed on any chassis; a Freightliner in the US for example, or a Tata in India would not be problem,” said the the spokesman.

Recently Ruthmann shipped a 54 m Height Performance Steiger T 540 to Turkey in kit form where the customer placed it on a Volva chassis. A T 540 was also shipped to the US, where it was placed on a 3-axle Freightliner.

The Steiger T 380 joins five other models in the Height Performance series, not including the soon-to-be launched T 630. The most recent launch before the T 380 was the 72 m working height series-topping Steiger T720 at bauma in April.