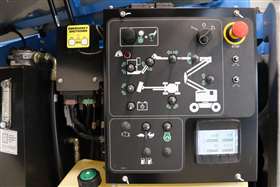 According to Larin, positive air shutdown systems are engineered to completely stop a diesel engine if it begins to experience a runaway incident.

“This scenario occurs when combustible gas, dust or vapor is sucked into a diesel engine’s air intake causing the engine RPM to speed out of control. In sensitive environments like oil refineries, diesel engine runaway may result in engine and other damage.”

The new Genie positive air shutdown system for Tier 4F Deutz diesel engines is designed with an automatic engine shutoff feature that includes RPM monitoring. This feature is simple to use and meets the strictest jobsite requirements and global environmental standards, according to Genie.

Thie system comes equipped with a plug-and-play CAN bus controller to monitor the engine’s standard RPM sensors, a sealed butterfly valve and a long-life motor, which reduces the risk of downtime compared to third-party kits. The system features a push-button valve test with engine on or off to minimize the time needed for a pre-operation inspection and testing.

Backed by Genie support and warranty, the Genie positive air shutdown system for Tier 4F Deutz diesel engines is now available as a factory-installed option and in the future as a Genie aftermarket parts kit.