New products and more from Skyjack 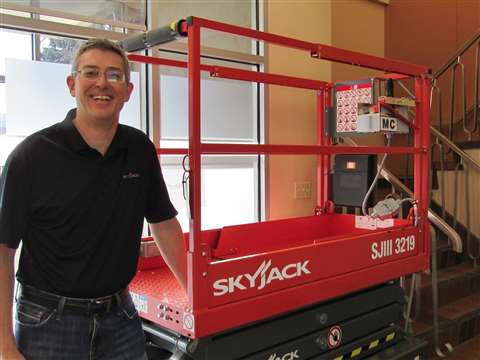 Skyjack will continue to grow its product line in 2017 with the addition of new booms and telehandlers, as well as a refresh to its rough terrain scissor products said company President Brad Boehler.

The company will touch both ends of the telehandler spectrum with a 12,000-pound capacity machine being introduced at the major trade shows next year, as well as a 5,000-pound unit to come to market later on.

“We’ve gained a lot of market share in telehandlers this year and with our new series introduction, we did quite well with that,” Boehler told ALH recently. “We’re quite happy with where we are in terms of market share perspective.”

The company will also introduce a new 85-foot articulating boom at The Rental Show 2017.

“We decided we needed to be more than just a scissor company, and so we started to build booms just over a decade ago,” Boehler said. “We’ve slowly and steadily built a full family of booms. This [new boom] is a natural extension of that. With the addition of that unit and the smaller electric articulated boom, and probably more electric booms like that, that kind of gives you a family that fills out 90 some odd percent of the marketplace. We’ll get to building the bigger booms eventually. It’s just been part of the overall growth plan to get to be a full line supplier.”

The company will also refresh its line of rough terrain scissor lifts over the coming year.

“The 68s are the youngest scissor products and those came out 10-12 years ago now,” Boehler said. “I was relatively new here when they came out. But some of our other rough terrain scissors are much older than that. There’s an opportunity there to do a lot of things to those products and make them more manufacturable. We’ve learned a lot since we designed those products and it’s time to put that knowledge into those products – bring them back out new and refreshed.”

For more on Skyjack’s plans including manufacturing expansion and Boehler’s take on global markets, see the exlcusive interview in ALH’s November-December issue.