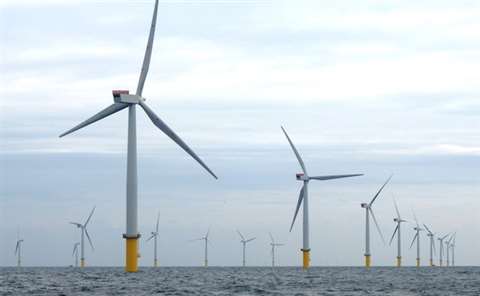 Impression of offshore turbines at the Dogger Bank Wind Farms

The company will work on the Creyke Beck A and B sites of the Dogger Bank Wind Farms, located 130km from the Yorkshire coast in the north of England.

Jones Bros will install over 32km of electrical cables within ducts, which will run in some cases beneath existing infrastructure.

The works, which will also include completing earthworks at the project’s onshore HVDC convertor station in Yorkshire, are expected to be completed in approximately two years.

Steve Wilson, Managing Director of Dogger Bank Wind Farms, said: “Getting the first spade in the ground is a significant milestone on any project, but for what will be the world’s largest offshore wind farm, this is a major moment for a project that has already been over a decade in the making.

“Dogger Bank Wind Farms will play a critical role in the UK’s effort to achieve net-zero through the use of low-carbon fuel sources and we’re incredibly pleased to work with one of the UK’s leading civil engineering contractors, Jones Bros, as we commence construction and start delivering Dogger Bank.”

The £9 billion (€10.6 billion) Dogger Bank project – a joint venture between SSE Renewables and energy firm Equinor – combines three wind farms: Creyke Beck A and B, plus Teeside A. Each farm will have an installed capacity of 1.2GW and is expected to power 1.5 million homes, representing around 5% of the UK’s electricity demand.

The first project is expected to achieve first power in 2023.