Parts of the action 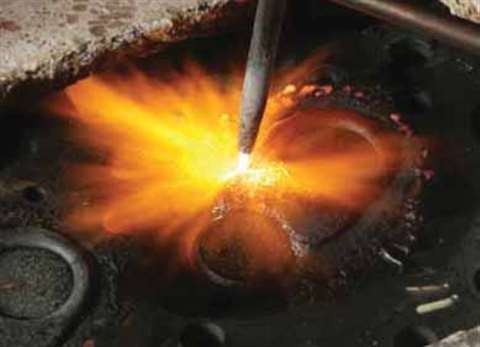 A major portion of Caterpillar's remanufactured products is engine related, with parts such as cracked engine cylinder heads being salvaged.

It is the view of some Original Equipment Manufacturers (OEMs) that investing in will-fit or non-genuine parts will result in less reliable and inefficient construction machinery. In addition, they claim the problem of counterfeit parts circulating in the construction sector is damaging the reputation of the whole, industry.

Michael Stevens, senior remanufacturing marketing consultant for Caterpillar in Europe, Africa and the Middle East (EAME), said the use of non-genuine parts reduces the resale value of the machine. He added that if non-genuine parts are used there is no guarantee with regard to the physical specifications, the material used or the heat treatment of the component.

"This means that there is a high risk that the normal life cycle of the component may not be achieved and any cost savings associated with the use of these parts may have to be measured against the cost of decreased machine reliability," he said.

Vice president, marketing and sales for Volvo Construction Equipment (Volvo ce), customer support, Goran Lindgren said the issue of counterfeit parts in the construction industry is becoming a bigger issue as the company grows its market shares. But he added the company prefers to see this as a challenge rather than a problem.

He said, "It has become more important to use original parts. They are engineered and tested to give optimised functionality and using original parts is proven to give longer lifetime and more uptime."

Thomas Neumann, managing director, sales and marketing, for consumables and components supplier, Assem Audi said, "Will-fit is probably not the best quality and OEM costs more than will-fit. If you have a machine, which is less than three years old, I would recommend that you pay a little more for OEM parts but if you have a very old machine, which is more than ten years old, you can take will-fit for less money."

He added, Assem Audi sources genuine and OEM parts only and does not deal with will-fit spares. Speaking about counterfeit parts used in construction equipment he said these can be potentially dangerous for the operator, but more importantly can damage the sector's reputation.

He said the profits made by producers of counterfeit parts are enormous, adding that in many cases only an expert can decipher whether a part is genuine or counterfeit.

"To be on the safe side you must know and trust your supplier - but this confidence takes years to build up," he said.

Mr Lindgren said the current market for consumables in Europe is strong and driven by an improving construction industry, mainly in central and Eastern Europe (ceE). He added there is a shortage of certain components due to high demand, but said for after sales this is overcome by remanufacturing programmes. With regard to shortages of steel in the market, he said that good forecasting and planning has minimised the shortage problem for Volvo ce. "The price increase has the same influence on all OEMs. We can see a turning point in pricing, one of the reasons being that China is now exporting not importing steel," he said.

Mr Neumann said that the number of consumables and component suppliers around the world has grown, which means that demand has also grown, indicating room for more growth.

He said, "Manufacturers are not able to serve the market because of the shortages of steel and tyres. They are having a big problem right now and sales are affected. Even we had some problems sourcing special types in the past, but our situation has changed in the last three months. But generally it will take some more time to satisfy the global demand for these products."

The biggest problem of not fulfilling, what Caterpillar terms 'good practices of preventative maintenance' is sudden component failure, according to Ernesto Antunez De Mayolo, productspecialist at Caterpillar (EAME) for filters and fluids. He said that premature failure in a part could result in unwanted downtime for machinery and additional costs. Cat's range of preventative maintenance products includes fluids such as lubricants, coolants, and chemical cleaners. "Caterpillar designs and develops its own filters and fluids in order to provide customers with a very high quality product. Our main goal is to provide customers with the means to achieve a lower cost of ownership," Mr Antunez De Mayolo said.

He added that Caterpillar tests its fluids under real-life operational conditions in Cat machines.

"We ensure that they (the fluids) meet each of the compartments' specific performance requirements and that all the parts inside these compartments are lasting as long as we expect them to last or, whenever possible, even longer," he added.

Mr Antunez De Mayolo said that the formulation of the additives in the fluids is a result of combining the latest in technology with testing procedures and specialist machine knowledge. He added that oils are used to protect against wear and corrosion but one of the key functions of lubricants in construction machinery today is to keep the engine as clean as possible.

As well as buying new parts, customers have the option of taking back parts to the OEM to be remanufactured so that they can be used again. Mr Stevens said that a major portion of Caterpillar remanufactured products are engine related. Other products include drive train components such as transmissions, torque converters and final drives, as well as hydraulic components such as rods and cylinders, pumps and motors. He added that critical engineering and technical updates are incorporated into Caterpillar remanufactured parts.

"It could be in fact that the dealer receives a superior part back from us," Mr Stevens said.

He added that the remanufacturing process works as an exchange system, which works on the basis that Cat dealers must buy remanufactured parts from Caterpillar in order to have the right to return the core (the part which is replaced).

He explained that the customer pays the Cat dealer the same price up front whether the part is old or new and only receives a rebate when the core is returned to the dealer.

"The core is then inspected in accordance with guidelines and the dealer establishes a level of credit depending on its condition. The customer has a vested interest to return the core before failure - if he runs it to destruction it is quite possible that his whole part or core will be worthless," Mr Stevens said.

He added customers could expect to make savings of between 40% and 60% by buying a Caterpillar remanufactured part, compared to buying a new part.

European remanufacturing centre is based in Shrewsbury in the UK, which primarily handles engine components, while a centre in Mexico specialises in fuel systems.

Mr Stevens said, "The biggest thing a customer has when he buys from Cat is peace of mind, because in this business downtime is critical and if the will-fit parts don't perform in the long-run it might be a false saving."

Volvo ce remanufactures a broad range of parts based on customer demand but the majority is drive train components and hydraulics.

This is achieved for a reasonable price through the company's exchange system, he added.

"As opposed to third party providers, the OEM remanufactures the components with the latest updates and with access to the correct technical specifications and thorough testing. Customers appreciate that this is a guarantee for high quality and prolonged lifetime of the component," he said.

Mr Lindgren said the quality of Volvo ce remanufactured parts and the 12-month warranty that is offered with them is the same as for new parts. The price for a remanufactured part from the company is around two thirds of the cost of a new part.

The shortage of tyres in recent years has led to manufacturers building new factories and developing new tyre ranges.

A spokesman for Michelin said the company is investing in additional earthmover tyre manufacturing facilities around the world.

Helen Tattersall, head of earthmover and truck marketing at Michelin, said, "This investment highlights Michelin's commitment to the earthmover market and is expected to play a core role in easing the worldwide tyre shortage which has gripped the industry."

Andy Morris, director for (OTR) tyres at Goodyear said, "The expansion of the L-5 range shows the level of commitment Goodyear has in serving the industry to meet our customers' requirements of in-service reliability through reducing downtime and reduced operating costs."

Bridgestone is to build a new tyre plant in Japan to produce large and ultra large radial tyres for mining and construction vehicles in response to growing global demand.

A spokesman for the company said, "Although Bridgestone has implemented initiatives to boost production capacity in response to this burgeoning demand, supply still falls shy of required levels."

Manufacturers and suppliers of consumables and components are still grappling with the problem of steel and tyre shortages while trying to meet increasing demand. With good forecasting and planning some manufacturers have minimised the shortage problems and companies investing in remanufacturing programmes has helped with combating delays. Looking ahead, Mr Lindgren said the internet would open up the possibility for more price comparisons and alternative sources in the consumables market. However, he added there are still a growing number of customers who are more focused on total operating costs per hour and wish to optimise or even outsource this.

The challenge for lubricant manufacturers in the construction sector is to remain familiar with new product development, according to Mr Antunez De Mayolo. He said the vision for developing Caterpillar fluids is the concept of 'Fill to overhaul fluids'. The idea behind these new products is to increase their longevity so that they will no longer have to be replaced between the machine's main maintenance checks. One of the first products in this range is Cat's extended life coolant, which can now last for 12000 hours in the machine.

On the remanufacturing side, Mr Stevens said, "Given the type of product we sell, particularly in Europe, which tends to be core product and smaller product, I think that in the future there will be more emphasis on having a more complete line than what we have now."