Plantforce to add ADTs to fleet 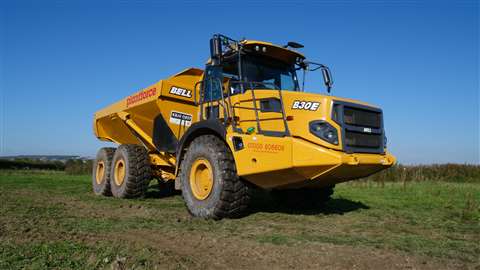 The company is a key supplier to major UK project Hinkley Point, along with companies involved in the construction of HS2.

Plantforce currently offers 10 B30Es, after its relationship with the manufacturer began in November 2016. It will now double its fleet size with a further 10. The company boasts locations in Bristol, Exeter, Bridgewater and Birmingham, all in the UK.

Operations director for Plantforce, Samuel Mercer, said, “With our customers increasingly requesting machines suitable for excavating sites such as Hinkley Point, quarry operations, housing sites, and for use as part of sea defence work, we felt the time was right to invest in a series of larger ADTs that would prove ‘task compatible’.

“While considering market options we looked at the Bell B30E in close detail and chose to invest in the model for multiple reasons. Its capacity to provide superior levels of fuel efficiency, together with its notable build-quality impressed us straight-away.”

Mercer added that the model’s digital Fleetm@tic system was exceptional and very versatile, proving all the information needed to the operator, without becoming overcomplicated.

Speaking on behalf of Bell Equipment, managing director, Nick Learoyd added, “It’s tremendous to hear that after just an 18-month relationship with the B30E, Plantforce is already looking to double its fleet numbers.

“The evolving construction landscape in the UK is prime for hardworking ADTs such as the B30E, and we feel certain that with its improved payloads, faster haul cycles and industry leading fuel economy, Plantforce’s clients will be more enabled and productive behind the wheel of a Bell ADT in this increasingly demanding construction climate.”