Car maker Nissan commissioned heavy lift and transportation specialist ALE to relocate bodywork stamping equipment at its production facility in Pretoria, South Africa. Nissan had selected the factory to manufacture the next-generation Navarra pickup trucks for 45 countries across the continent and the equipment relocation was required to facilitate this. 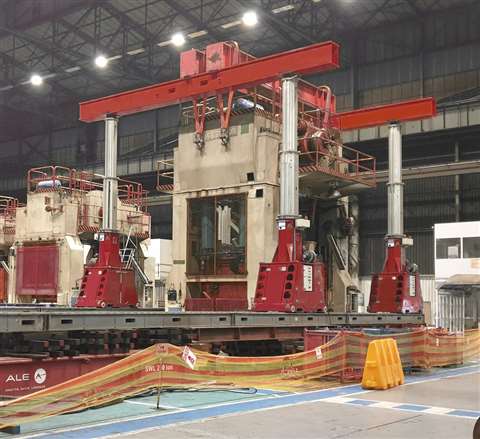 The four-post lifting system ran on an elevated rail platform

The job comprised the relocation of a 77.4 tonne press crown within a two-week time frame without disturbing existing Nissan production lines. The crown press had four connecting rods protruding from its base, increasing the overall height to which it had to be lifted in order to clear the press bed and uprights.

To carry out the relocation ALE used a four-post lifting system on an elevated rail platform. A combination of load spreading beams, rails and packing timbers were used to span a suspended (false) floor and reduce the overall ground bearing pressure. The crown of the press was then lifted and moved 24 metres longitudinally using the gantry lift system. The crown then needed to be rotated 180 degrees. For this ALE used a 400-tonne capacity in-house-designed turntable set on four 1 metre x 3.3 metre load spreading mats. Four 1 metre stools were placed upon two 0.9 metre x 6.5 metre load spreading mats to allow space underneath the resting crown for the connecting rods at its base. The crown was then unloaded onto the stools and rotated.

During rotation, the gantry lifting system and elevated rail platform were dismantled and reinstalled at 90 degrees relative to their former position. The crown was then lifted from the turntable, moved 28 metres transversally and installed. ALE’s four-post lifting systems allowed the press to be slotted in its column keys at a 100 mm offset.