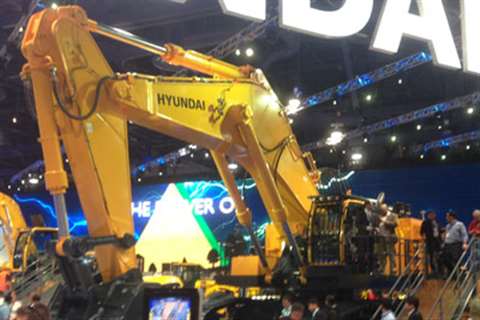 Hyundai Construction Equipment Americas is launching an amphibious excavator and its largest excavator model in the North American market.

On show at ConExpo, Las Vegas, these machines are joined by the R220LC-9 HI-POSS excavator prototype.

The company said this machine featured its next generation power system, providing improved fuel consumption and controllability through the optimal control of electronic pumps and valves.

It said the HI-POSS system (Hyundai Intelligent Power Optimal Sharing and Energy Saving) maximised energy use through an electronically-controlled pump and valve, rather than the conventional spool-operated valve. It said it was expecting a 20% saving in fuel.

The R220LC-9A amphibious excavator is described as a standard machine with an amphibious undercarriage designed for wet environments like swamps and marshes.

It features hydraulic extendable pontoons made from premium grade steel designed for floatation on water. Multiple motors propel each pontoon. Optional supplementary pontoons can be added to each side of the machine to boost stability in deeper water to a maximum of 4.3m.

Hyundai’s largest excavator, the R1200-9, is at the show. With an operating weight in the 118 tonnes class, it has a dig depth of more than 8m, and a bucket digging force of more than 115 tonnes.

It is designed for the quarrying and mining sector, and is powered by a 552kW Cummins QSK23-C engine.