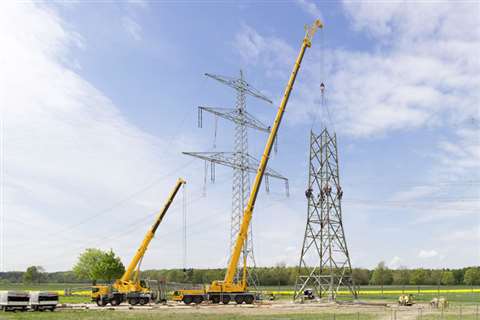 The 300 tonne crawler crane was used to assemble a tower pole at the Vechelde site in Peine. The heaviest section to be installed was the lower grid, which weighed 27 tonnes. The LTM 1300-6.2 was configured with 56 tonnes of counterweight and 5.5 metre jib. The load was lifted at a radius of 18 m. A Liebherr LTF 1060-4.1 telescopic truck-mounted crane was used as an auxiliary crane.

Once the new electricity pylon was installed, the LTM 1300-6.2 was used to fit the power lines from the old tower to the new one. The old tower was then dismantled.

Kai Giesker, KVN Autokrane commercial director, said, “The LTM 1300-6.2 we have bought in particular for the construction of new power poles and the increase of existing power poles, as our LTM 1200-5.1 reached the limits of its capacity in this application. The existing overhead power lines are no longer sufficient and new transmission lines must be built from north to south. We see good medium-term prospects for mobile crane operations.”