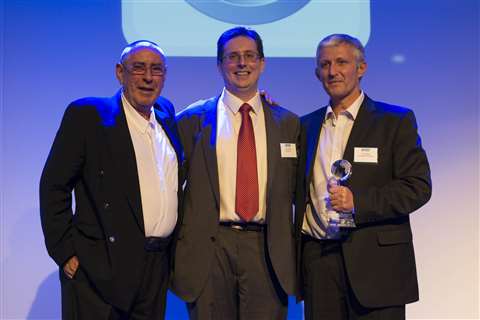 The winners of the inaugural International Construction Economic Forum (ICEF) awards have been revealed at a gala dinner held tonight (21 November) at the Hotel Okura in Amsterdam, the Netherlands.

The winner of the International Construction Project of the Year award, which recognised a scheme worth US$ 100 million or more and of international significance, was the JW Marriott Marquis Hotel in Dubai, from Brookfield Multiplex.

The hotel is a twin tower complex that, at 355 m high, breaks the Guinness World Record for the World’s tallest dedicated hotel.

It was selected from a shortlist of five, and beat the Cognizant Technology Park in Chennai, India, from Larsen & Toubro, the Shard in London, UK, from the Mace Group, the Kattupalli Port in India from Larsen & Toubro and the Vidin-Calafat Bridge in Bulgaria, from FCC.

The panel of judges said the winning JW Marriott Marquis Hotel was an outstanding project that demonstrated a close working relationship between the construction team and other stakeholders, without compromising safety.

There were no major accidents or fatalities on the development, and the judges said it was an example of how complex, ground-breaking projects can be delivered safely, efficiently, on-time and on-budget to a world class standard.


Meanwhile, the winner of the construction equipment innovation award was Caterpillar, for its 336E H hybrid excavator.

Four other companies were shortlisted – Alsina, for its Alispercha Fall Prevention system, Atlas Copco, for its tunnel excavation technology, Manitowoc for the Grove GMK6400 mobile crane and Wacker Neuson for the EH100 electric hand-held breaker.

The judges said the hybrid machine was a fantastic innovation that dramatically cut costs using tried and trusted technology, with a short pay-back period.

Finally, the winner of the construction equipment innovation award for component or sub-system design was Liebherr, for its PowerBoom technology for crawler cranes.

The winning technology from Liebherr increases lifting capacity by more than 50% over the standard load chart. The parallel lattice sections improve stability in the direction of the load, as well as to the side. It is available as an option on new cranes and can be retrofitted to older Liebherr models.

The judges said the PowerBoom was as an example of innovative engineering that not only radically increases capacity and productivity, but does so in a way that is cost-effective and flexible for the customer.

ICEF takes place from 20 to 22 November. ICEF 2014 will be held from October 29 to 31 at the Gloucester Hotel in London, UK. More details will be available shortly at www.icef.biz