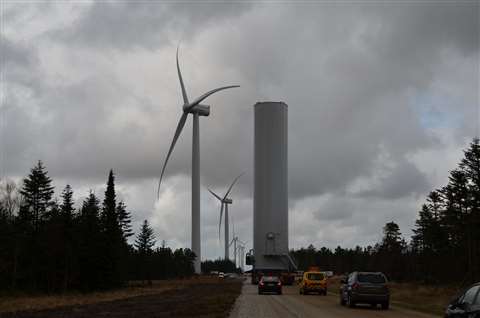 It was also an unusual transportation as the base tower section had to be moved in a vertical position. France-based OCTRA and Spain-based Coordinadora - the two companies in charge of the transport - needed a specialized transport company to carry out this delicate operation.

The tower’s electrical components were pre installed at the factory and, as a consequence, the 29 m high T1 base tower could not be transported in the conventional way (a horizontal position). Coordinadora and OCTRA shipped all four wind turbine components from the factory to the port of Hanstholm, Denmark. Here, the transport vessel’s cranes lifted the 228 tonne base tower in its upright position onto self propelled modular transporters (SPMTs) for onward transport.

The 22 kilometre route from port to installation site was closed by local police to ensure a clear and safe route. Using SPMTs for the transport ensured the stability, integrity and safety of the upright load over uneven roads and inclinations, the company said. Measures were taken to minimise traffic disruption and to ensure a bridge on the route could withstand the weight of the load. Close co-ordination with the authorities for this operation enabled Mammoet to swiftly transport the T1 base tower to site in Østerild, arriving two hours ahead of schedule.

The entire operation included a total of more than 700 tonnes of transport weight - constituting a worldwide record for a wind turbine transport.